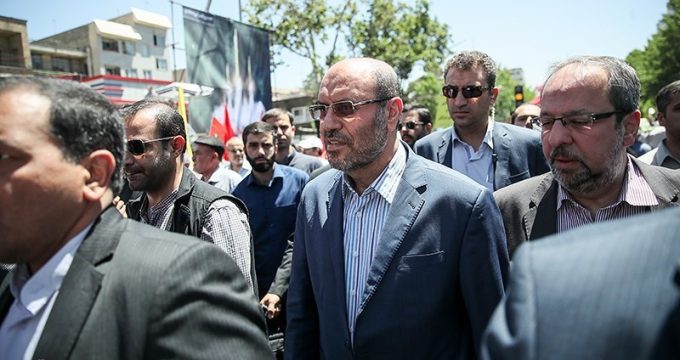 IRNA – Minister of Defense and Armed Forces Logistics Brigadier General Hossein Dehqan said at the International Quds Day rallies on Friday that the forged Zionist regime is the source of instability, insecurity, conflict and clash the Islamic World.

Dehqan said designation of the last Friday of the fasting month of Ramadan as the International Quds Day aimed at showing Islamic World’s unity against the world hegemony.

He added, ‘Our nation will never allow the Zionist establishment to have a foothold in the Islamic world or that the Americans would (falsely) imagine that they can dominate the Muslim countries through dividing them them.’

The International Quds Day demonstrations took place in Iran and abroad on the last Friday of the holy fasting month of Ramadan.

Some 4,000 Iranian and international journalists and photographers covered the event.

The last friday of the holy month of Ramadhan was designated as the International Quds Day by the late Imam Khomeini, the Leader of Iran’s 1979 Islamic Revolution. The annual event aims to draw international attention to the Palestinian cause.

Iranians demonstrate their hatred of the Zionist occupiers of the Palestinian territories each year by attending the huge rallies.