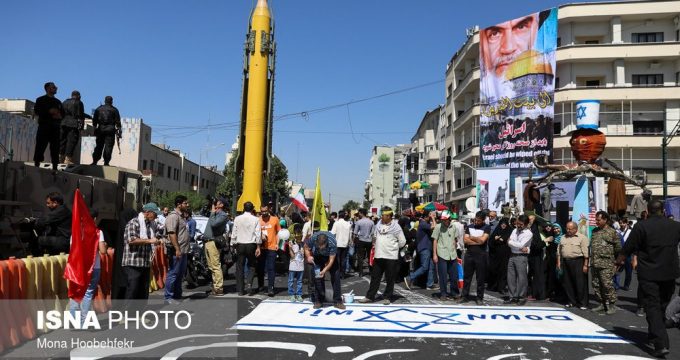 Alwaght– International Quds Day rallies in Tehran have been marked with a spectacular display of versions of missiles that Iran’s Islamic Revolution Guards Corps fired at ISIS terrorist group positions inside Syria.

Organizers of the International Quds Days rallies in Tehran put on display the ‘Zolfaqar’ ground-to-ground missiles the IRGC employed to destroy ISIS targets in Syria’s Deir Ezzor on June 18.

In addition to Zolfaqar –with a range of 700 kilometers- the ‘Qadr’ missiles are also erected on trucks in the streets. Qadr can hit targets within a range of 2,000 km.

An ISIS weapons and munitions cache in northern Deir Ezzor was “precisely struck and completely annihilated,” the statement said, adding that several tanks, military vehicles and suicide cars and a huge number of long-range missiles were destroyed. Hundreds of ISIS terrorists, including top commanders were killed in the attack.

This year’s Quds Day rallies in Iran apart from anti-Israeli slogans and burning of the regime’s flage also have strong anti-US sentiments including the burning of the country’s  flag, given the US Senate’s move to pass a bill on new sanctions against Iran and Washington’s repeated rhetoric of military action against Tehran.

Demonstrators in Tehran and other cities across Iran also expressed their hatred to the Saudi regime which has alligned itself with the Israeli regime and the US while committing atrocities in Yemen and supporting Takfiri terrorist groups.

Millions of people have taken to the streets across Iran and other world countries Friday to show their solidarity with the Palestinians and condemn Israeli regime decades-long occupation, brutality and atrocities perpetrated on Palestinians

The rallies are held to mark Quds Day, which falls on the last Friday of the Muslim fasting month of Ramadan.

In Tehran and other cities and towns, people from all walks of life gathered for the annual event which usually marks chanting slogans against Israel and burning its flags.

Chanting slogans against the Tel Aviv regime and its allies, demonstrators called for an end to the Israeli occupation of Palestine, Judaization of the holy city of al-Quds and construction of Israeli settlements across the West Bank.¬

The demonstrators also carried placards and chanting slogans against Israel and the US, the marchers also voiced support for the Islamic Republic’s sovereignty and the country’s defense programs.

“The commemoration of Quds Day does not merely mean defending an oppressed nation who have been driven out of their motherland and homes, but defending Palestine today is defending a reality much greater than the issue of Palestine,” the Leader noted.

Speaking on the sidelines of the event, Rouhani said “the message of Quds Day is that of hatred towards the occupying and usurping regime as well as support for the oppressed nation” of Palestine.

He underlined the importance of this year’s Quds Day “given the presence of terrorists in the region, who are backed by Israel,” adding that people are determined to cleanse the region of Tel Aviv-backed terrorists.

International Quds Day was designated by the late founder of the Islamic Republic Imam Khomeini in 1979 and since then Muslims and people of other faiths have been holding rallies and gatherings across the world to support the Palestinian struggle against the usurper Israeli regime.