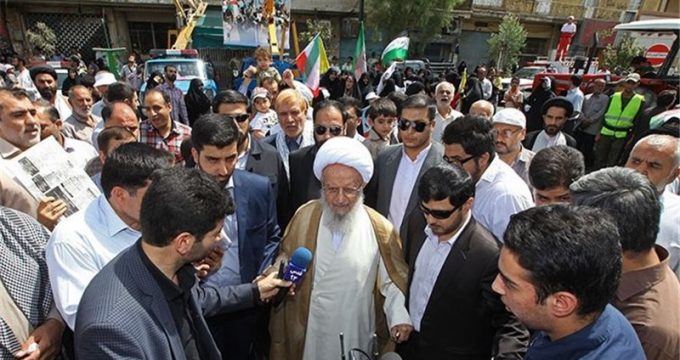 Tasnim – Senior Iranian clerics praised the massive participation of the Iranian people in the nationwide rallies held to mark the International Quds Day, saying the Palestinian issue will not fade into oblivion.

Speaking to reporters during a rally on Quds Day in the central city of Qom on Friday, Ayatollah Makarem Shirazi said the Iranian people would boost national solidarity and unity through taking part in the rallies held across the country.

The cleric further emphasized that God willing, the Quds and the Palestinian issue will not be forgotten thanks to the anti-Israeli rallies.

Ayatollah Ahmad Jannati, the chairman of Iran’s Assembly of Experts, also participated in the demonstration held in central holy city of Qom to mark the Quds Day.

He hailed the Iranian people’s high turnout in the rallies and said the country’s government should be grateful to the people who are always “on the scene”.

Millions of fasting Iranian people from different walks of life poured into the streets in cities across the country on Friday to join the demonstrations in support of Palestinians, who have been suffering from Israel’s atrocities for decades.

Each year, the International Quds Day is celebrated across the world on the last Friday of the Islamic holy month of Ramadan.