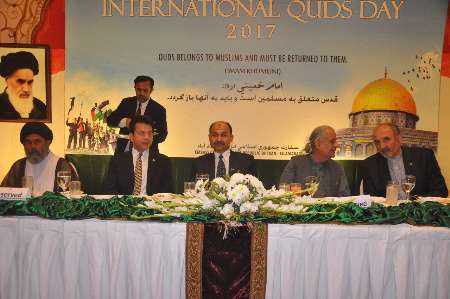 IRNA – Embassy of the Islamic Republic of Iran in Pakistan holds a special ceremony on the eve of International Quds Day on Thursday to express solidarity with the oppressed Palestinian nation.

Pakistan Senate Chairman Mian Raza Rabbani was the chief guest of the ceremony.

Ambassador of Iran to Pakistan Mehdi Honardoost on the occasion said Quds is a symbol of unity for the Muslim world on which Muslims and even non-Muslims show solidarity with the Palestinian people against illegitimate occupation of the Zionist Regime.

“The Quds Day is not only related to the Palestinian people but it is a global Islamic day,” he said.

The ambassador added that it is a duty for all nations and societies, especially Muslim countries, to encourage international organizations in protecting the rights of the oppressed Palestinians.

A group of performers from Iran performed religious anthem about the Quds Day.
Pictures of the Palestinian people struggle with and atrocities of the Zionist regime were also displayed during the ceremony.

The late Imam Khomeini initiated the Internationals Quds Day as an integral part of the holy fasting month of Ramadan so that Muslims would never forget their responsibility and duty towards Palestine and all oppressed people in the world. The day is held each year on the last Friday of Ramadan.