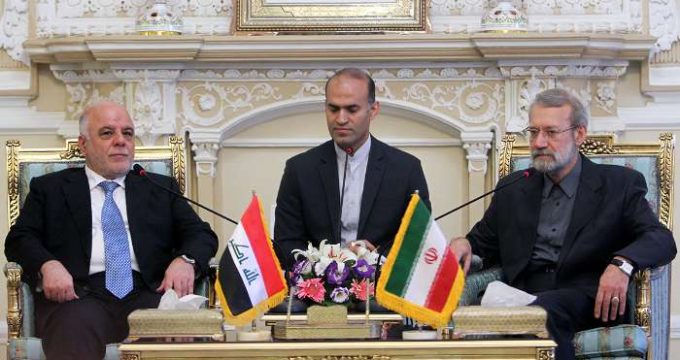 Larijani said that Takfiri terrorists seek two objectives in Iraq; first to create internal conflicts in the country “to raise the issue of Iraq’s partition, which Israel is seeking,” and second to engage Baghdad in domestic issues to undermine its positive role in the region.

He praised Iraq’s fight against terrorism and pledged Tehran’s support for Baghdad to that end.

“Iran will never play into the hands of countries that deploy terrorists under different pretexts [to achieve their objectives],” the top Iranian parliamentarian said, adding that Iran will always stand by its “close ally” in the fight against terrorism.

Abadi, for his part, stressed that the Baghdad-Tehran ties would never be undermined.

He also pledged his country’s continued fight against terrorism.

“We are now in the phase of annihilating Daesh and we will be a forerunner in repelling terrorist attacks,” he said.

“Fighting Daesh is our slogan, because the militants have shown that they are not committed to any religion and their latest attack on the Iranian parliament well proved it,” Abadi said.

On June 7, gunmen mounted almost simultaneous assaults on Iran’s parliament and the Mausoleum of the late Founder of the Islamic Republic Imam Khomeini. The Daesh Takfiri terrorist group claimed responsibility for the assaults, which killed 17 people and injured over 50 others.

The Iraqi premier underlined the need for solidarity in the battle against Daesh, expressing regret that divisions among certain regional countries were preventing efforts aimed at destroying Daesh and restoring peace and stability to the region.

Elsewhere in his remarks, Abadi welcomed further promotion of economic ties between his country and the Islamic Republic.