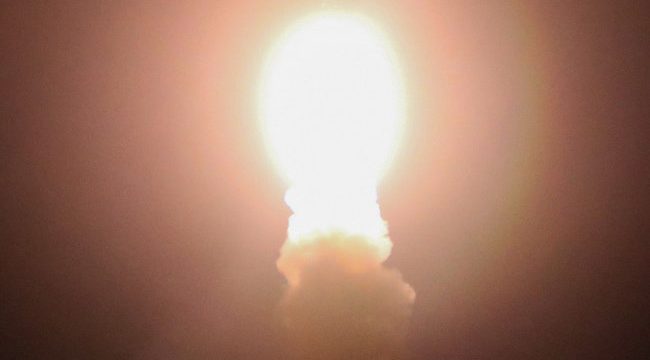 Iran’s strikes on Daesh in Syria a ‘warning to Israel, US and Saudi Arabia’

Sputnik – Commenting on the recent Iranian strikes on Daesh in the Syrian city of Deir ez-Zor, Iranian diplomat Hossein Sheikholeslam and military journalist Hassan Shemshadi told Sputnik Persian that it is not only a direct message to terrorists but, primarily, to their sponsors and donors, namely Israel, the US and the ruling clan in Saudi Arabia.

According to the IRGC statement, it was a “warning to terrorists” following Tehran terrorist attacks on June 7.

“In case if attacks on Iran continue, the flame of our justifiable anger will burn terrorists to ashes,” the statement said.

Several attackers raided the shrine of the late founder of the Islamic Republic, Imam Khomeini, south of the capital Tehran. The attackers started a shooting at the visitors of the shrine. One of the attackers detonated himself in front of a police station opposite the shrine.

Daesh terrorist group has claimed responsibility for the terrorist attacks.

The IRGC said the strikes have been coordinated with Damascus and were fired from the IRGC aerospace force’s bases in Iran’s western provinces of Kermanshah and Kurdistan.

It was the first operational use of Iran’s ballistic missiles since the Iran-Iraq war of the 1980s.

Hossein Sheikholeslam, adviser to the Iranian Foreign Ministry, a former ambassador to Syria, voiced to Sputnik Persian an official position of Iran with regards to the conducted operation, adding that in case of need, similar operation will be repeated upon certain agreement and in coordination with the coalition of Syria, Iraq, Lebanon and Russia.

“During the scrupulous investigation of Tehran’s recent terrorist attacks it was established that the command center of the eliminated terrorist leaders was located in Syria’s Deir ez-Zor province. The decision was made to punish the terrorists. I reiterate that if there is any need, similar operations will be repeated, under certain agreement [of the coalition],” he added.

Hossein Sheikholeslam said that the operation was a direct message not only to terrorists but, primarily, to their sponsors and donors, namely Israel, the US and the ruling clan in Saudi Arabia.

“It is crystal clear that it is a message not only to terrorists but to their sponsors – Israel, the US and the ruling monarch dynasty of Saudi Arabia – who, by hands of terrorists, have committed mass killings in the region.  Iran has the full will to display its military might and deliver pinpoint blows to any location of terrorists. It is a message to all those who have committed and is still committing violence in the region,” Hossein Sheikholeslam said.

Hassan Shemshadi, an Iranian Radio and Television correspondent in Syria and Iraq, who has been gunning for by Daesh militants since 2012, revealed to Sputnik certain details of Sunday operation.

“IRGC’ missile strike on Daesh positions in the Syrian Deir ez-Zor brings a certain message to the terrorists after their attacks on the Iranian parliament and Imam Khomeini shrine in Tehran. Right after the attacks, IRGC officially declared that Iran will deliver a crippling blow to the terrorists for the innocent blood they spilled,” the journalist said.

He further recalled that just hours before the strike from the Kermanshah range, the Commander-in-Chief of the Islamic Republic of Iran, Supreme Leader Ayatollah Ali Khamenei said that Iran is not the one to swallow the slap of the terrorists, but the one to slap in return even stronger.

It was a message to terrorists to be aware, even at a distance of hundreds of kilometers from Iran, of Tehran’s eagerness to smash them, the journalist said.

Hassan Shemshadi also reiterated that it was a message to their sponsors that Iran won’t yield in terms of its national security.

The journalist said that it was not a spontaneous and uncoordinated attack. Through its intelligence, Tehran has received exact information on the whereabouts of the terrorist leaders, who were behind the Tehran’s attacks, their command center, ammunition and logistic depots. It is an indication of the highest level of work of the country’s intelligence, the cohesiveness of their activities and the warning to terrorists that wherever they are located, they will still get caught by the Iranian intelligence.

Deir ez-Zor, he said, has become a shelter for all the terrorists who were defeated elsewhere and they have concentrated in this particular province with their armaments and equipment.

Shemshadi said it was also a message to those who are striving for a confrontation with Iran and are urging for it. He reminded of a recent voyage of Donald Trump to Saudi Arabia and the multi-billion deals on the supplies of the US’ armaments they reached. Saudi Arabia then openly announced that it would advance towards Iran’s borders to “punish” Iran for what it has allegedly done in the region. Hence it was a message to those foreign “friends” of the terrorists that they should not joke with Iran.

The recent strike was just a light slap in the face of the terrorists, he said. In case they don’t stop their destructive activities, Iran will slap harder, no matter where – inside the country or outside its borders.

Finally, Shemshadi pointed out that the strike, conducted from the Iranian range, was fully coordinated with the governments of Syria and Iraq, their intelligence and special forces.

“If the governments of these countries turn to us for help in elimination of Daesh, we will react immediately. Iran is not the US, whose so-called international coalition delivers demonstrative disorderly strikes on alleged Daesh positions,” he finally stated.