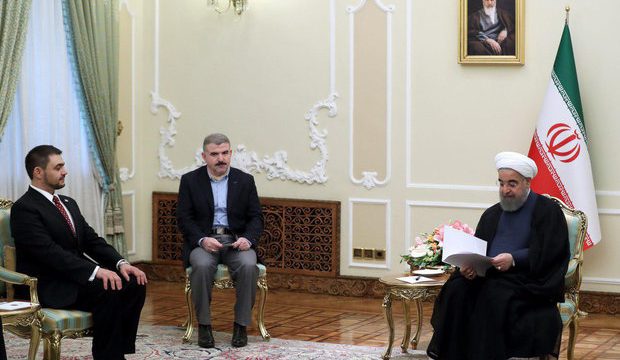 MNA – President Rouhani, while pointing to strong determination of Iran and Mexico to boost relations, called for identification of areas for deepening Tehran-Mexico City ties.

Hassan Rouhani made the remarks on Tuesday at a ceremony for receiving credentials of the newly-appointed Ambassador of Mexico to Tehran Jose Alfonso Zegbe Camarena.

The Iranian President expressed hope that further mobility and reinvigoration will be observed in bilateral relations between the two countries in the new era; “Iran and Mexico have age-old relations though existing opportunities have not been properly used to promote level of interactions especially in the economic sector.”

He said Islamic Republic of Iran had always pursued the policy of having good relations with Mexico and other countries in Central and South America adding “given the implementation of the Joint Comprehensive Plan of Action (JCPOA) and removal of some sanctions, grounds are prepared now for increasing volume of interactions between Tehran and Mexico City.”

He touched upon proximity of views held by the two sides towards global issues and developments asserting “intervention of the great powers in affairs of other countries should be eliminated and independent states also need to strive to establish close relations and form a unified voice in the world.”

“From the point of view of the Islamic Republic of Iran, political dialogue and consultation are the only solutions to international problems. Iran and Mexico share similar views in this regard and need to form a single quadrant in the international arena,” Rouhani underscored.

The new Mexican Ambassador José Alfonso Zagreb Camarina, after delivering his credentials to the Iranian President on Tuesday morning, conveyed congratulatory message of the Mexican President and government on the occasion of Dr. Rouhani’s reelection.

“Relations between the two governments and the two countries’ parliaments are at a high level and the two sides enjoy extensive cultural ties,” he stressed.

The Mexican ambassador emphasized that his country was willing to deepen relations with Tehran stating “no efforts will be spared to expand economic and trade cooperation parallel with the level of political ties.”