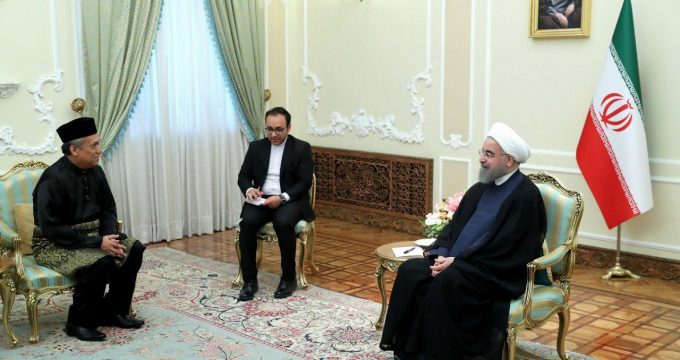 IFP- Iran’s President says the Islamic Republic is ready to broaden its relations with Bangkok and Kuala Lumpur in various fields.

Speaking in a Tuesday meeting with new ambassadors of Malaysia and Thailand, President Hassan Rouhani voiced Iran’s willingness to promote its cooperation with the two south Asian countries.

While receiving the letter of credentials of Thailand’s new Ambassador to Tehran Kallayana Vipattipumiprates, Rouhani expressed the hope that by utilizing the capacities bilateral relations would be boosted.

“Iran and Thailand have good agreements to expand and deepen cooperation, especially in the fields of energy, industry and agriculture. With implementation of these agreements and participation of public and private sectors, we will witness more development of relations,” Rouhani added.

Stressing that the ties between the two countries are expanding and developing, Rouhani said after the implementation of the JCPOA and removal of sanctions, there is a good opportunity to strengthen bilateral relations in order to improve Tehran’s economic and cultural ties with Bangkok.

For his part, the new ambassador of Thailand to Tehran said Bangkok is interested in expanding relations with Tehran in the areas of energy, trade, food, agriculture, and tourism.

In another meeting with new ambassador of Malaysia to Tehran, the Iranian president underlined the promotion of ties with Kuala Lampur and said development of relations between Iran and Malaysia in all fields will be beneficial to both nations.

Rouhani also stated that Iran is ready to deepen ties with Malaysia in fight against terrorism and violence in the region.

“The Islamic Republic is ready to boost ties with Malaysia in different fields, including energy and tourism,” President Rouhani added.

The new Ambassador of Malaysia to Tehran, Dato Rustam bin Yahaya, said in turn that bilateral relations are developing and his country is willing to further develop these ties.