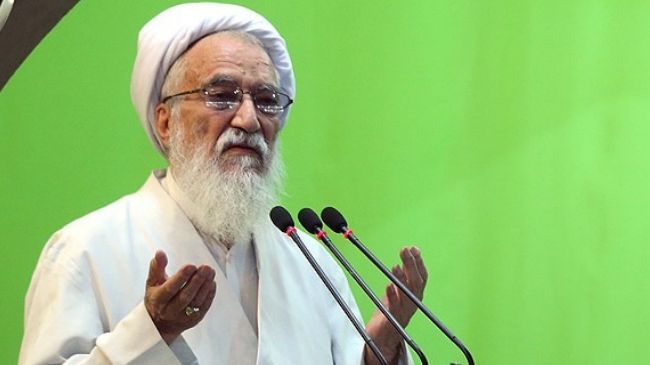 Major cleric: Participants in 2009 conspiracy should be kept out of government

IRNA – Tehran’s substitute Friday prayers leader said those who triggered political unrest after the 2009 presidential elections should be deterred from having any role in the government.

Addressing thousands of worshipers in his second sermon, Ayatollah Mohammad Ali Movahedi Kermani said these people should be identified and there is no room for them to partake in the country’s state affairs.

The ayatollah was referring to the unrests after the 2009 presidential election which started when one of the candidates refused to accept the result of the election.

‘Islamic Republic of Iran is guided by Islamic teachings and bears all the criteria of an Islamic government,’ he said.

Stressing that everyone should be vigilant towards the enemies’ plots, Ayatollah Movahedi Kermani referred to remarks made by the Supreme Leader of the Islamic revolution quoting him as saying, “The US is our enemy and you should be watchful not to be deceived by it and avoid being optimistic. Under no circumstances should you trust the US as long as you are committed to the government of the Islamic Republic and support it and Islam and you should resort only to the holy Quran.

‘Never be enticed by the enemies’ smile as they seek to play trick on you and in a word you should dash your hopes on the US and only trust your own people and use the capabilities of your youth and the existing facilities and opportunities to empower your country through the Economy of Resistance.’