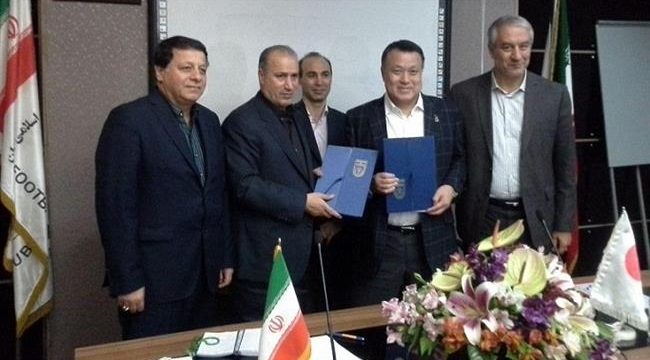 Press TV – The Football Federation Islamic Republic of Iran (FFIRI) and the Japan Football Association (JFA) have struck an agreement on the promotion of cooperation and interaction between the governing bodies responsible for organizing national teams as well as club competitions in the two Asian countries.

On Tuesday, President of the FFIRI, Mehdi Taj, and his Japanese counterpart Kozo Tashima signed the memorandum of understanding (MoU) during a ceremony in the Iranian capital city of Tehran.

“I view Japan as the standard basis of Asian football. Iran, Japan, China and South Korea can wield enormous influence in the Asian Football Confederation , and it is necessary to bring about a number of reforms to the AFC,” Taj said.

“We should set Iran as an example for all-out development, and are very grateful for measures aimed at expansion of cooperation with the FFIRI. Some countries have no effect whatsoever on Asia’s football, while some others are highly influential. Such states must receive further AFC support so they can advance to the FIFA World Cup Round of 16. Japan always stands up for more rights for countries participating in FIFA World Cup,” Tashima commented.

The agreement between FFIRI and JFA aims to raise the level of cooperation and to deepen relations between the two countries in football.

Holding training courses for Iranian male and female coaches and referees, organizing friendly games, exchanging expertise on sport and exercise medicine, construction of sports facilities as well as production of sports equipment are among the Iranian side’s priorities by signing the MoU

The Football Federation Islamic Republic of Iran (FFIRI) has so far signed MoUs with several different countries, including Armenia, Belarus, Italy, the Netherlands, Norway and Romania.