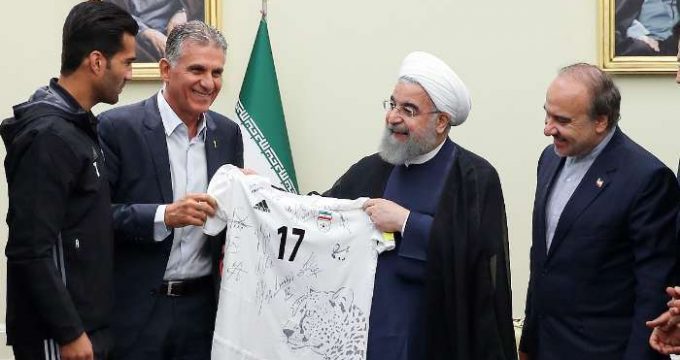 President.ir- President Rouhani met with the coach, players and the coaching staff of the national football team and commemorated the Qadr nights and said: “Imam Ali (AS) is the great example of valour and courage”.

In the meeting that was held on Wednesday, Dr Rouhani added: “Today, apart from the responsibility that you have in the field of championship sports, you carry a heavy moral responsibility in the society”.

Stating that in today’s world, athletes and artistes use their position to do acts of charity, he said: “We must learn from Imam Ali’s (AS) way of living and get energy and help from him”.

Iran’s national team can break a record, said Rouhani adding: “Qualifying from the group stage in the Moscow World Cup is feasible for Asia’s first team”.

He also said that sport plays an important role in people’s health and happiness, adding: “Today, football has turned into a public sport and all people, including men and women, girls and boys are interested in this sport”.

Winning in championship sports, especially football is the manifestation of national integrity, said the President adding: “Bringing honour in football matches is manifested in the word “Iran” and when they win, all groups and ethnicities demonstrate unitedness and this is where unity and integrity shows itself and people feel proud of being Iranians”.

Describing Iranian nuclear negotiation team’s success in negotiations with world powers an honour for the Iranian nation, Dr Rouhani said: “Iranian people feel proud of being Iranians when their president suggests the proposal of World Against Violence and Extremism (WAVE) in the United Nations, stressing Iran’s role as the forerunner of fighting against violence”.

“The people of Iran have endured a lot of hardships and problems throughout the history and deserve to be happy,” continued the President.

He also said: “We must do whatever we can to make the Iranian nation happy because this nation worked a lot to achieve independence and freedom. The least thing we can do for them is to make them smile and be proud of being an Iranian”.

The President of the Islamic Republic of Iran said: “I congratulate this victory on behalf of the 80-million Iranian nation and the administration will do whatever it can in supporting the national team”.

He also appreciated the Portuguese coach of Iran’s national team and said: “A foreign coach cooperating with Iranian players is another small example of interaction with the world and indicates that when we interact with the world well, we can create more honours”.