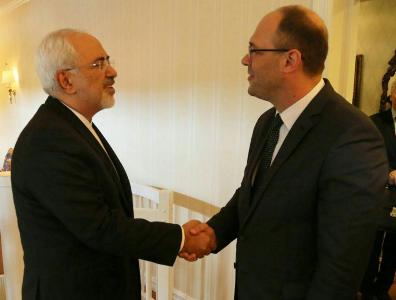 IRNA — Foreign Ministers of Iran and Croatia discussed issues of mutual interest on the sidelines of Oslo Forum on Tuesday.

Zarif arrived in Oslo, capital of Norway, on Monday and had meetings with his Norwegian and Indonesian counterparts.

He also discussed the latest regional and world developments as well as Joint Comprehensive Plan of Action with European Union Foreign Policy Chief Federica Mogherini on Monday afternoon as well.

Foreign Minister Zarif attended Oslo Forum on Tuesday and former US Secretary of State John Kerry as well as EU foreign policy Chief Mogherini and a number of foreign ministers were present as well.

Zarif also met with Slovakian foreign minister on the sidelines of the forum.