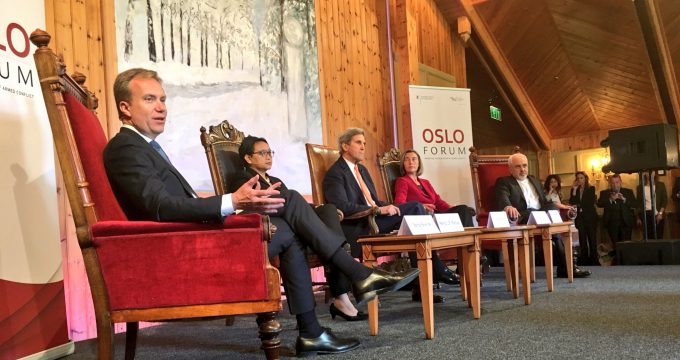 Zarif: Countries’ problems should be resolved through negotiations

IRNA — Foreign Minister Mohammad Javad Zarif said on Tuesday that pressurizing and imposing sanctions on nations are not helpful in resolving the problems between the countries and all should resort to friendly and peaceful negotiations.

Speaking in the first panel at Oslo council, he said ‘we ask our neighbors to resolve their problems through friendly dialogue as exerting pressure, provocking and threatening others are doomed to failure.

‘All countries should play active role in resolving regional disputes,’ he said.

Oslo Forum 2017 opened Tuesday with the participation of officials from numerous countries and international organizations, including Iran’s Foreign Minister, the US former Secretary of State, Indonesia and Norway Ministers of Foreign Affairs.

Officials and figures from more than 100 countries are taking part in the Forum to discuss the world conflicts and the ways to realize the global peace.

Some particiapants, including Zarif, the US former Secretary of State John Kerry and European Union Foreign Policy chief Federica Mogherini, are expected to give lectures in the different panels of the Forum after the opening session.

Iran’s Foreign Minister would also hold talks with some officials present at the Forum. He has already met with his Norweigian and Indonesian counterparts.

Oslo Forum, as an international conference hosted by the Norwegian Foreign Ministry and supported by the Swiss Center for Humanitarian Dialogue, has become an annual opportunity since 2003 to elaborate on global conflicts, particularly in Africa and Asia, and trying to find solutions for them.

The senior mediators, players and decision makers gather together in the Forum to create a place for unofficial talks to face the challenges ahead and finding proper solutions according to the Chatham House model.

The main goals of the international gathering include developing mediation-based solutions to conflicts, creating a community of mediators and an increase in awareness and learning on issues, challenges and solutions.