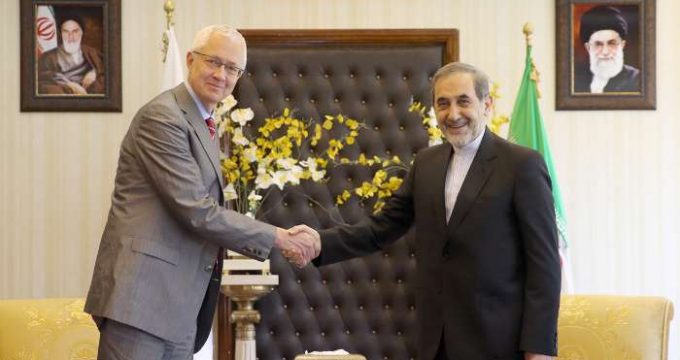 IRNA – There is good ground for economic and industrial cooperation between Iran and Sweden, says the Chairman of Strategic Research Center of Iran’s Expediency Council.

“Through very careful and strategic interdisciplinary studies, Iran and Sweden will be able to recognize and develop further grounds for cooperation,” Ali Akbar Velayati said on Tuesday during a visit with Gunnar Fors, Head of Research Service of the Swedish parliament.

Tehran and Stockholm could devise the roadmap for promoting bilateral ties through connecting their research centers, Velayati said.

“Establishing ties between research centers could be very effective for the decision-makers and development of regional and international ties,” he said.

The head of Strategic Research Center of the Expediency Council also touched upon fast developments and various recent regional and international events, saying that unlike the past, now regional issues are affecting international developments.

“Developments tend to be so fast and unexpected that they make it inevitable for us to be highly alert, study deeply, understand the situation and develop accurate prospects,” Velayati said.

“Establishing cooperation between research centers could be worthwhile in this regard,” he added.

Gunnar Fors, on his part, expressed hoped for enhancement of cooperation between Swedish and Iranian research centers.

The head of Research Service of the Swedish parliament said that during his visit to the Islamic Republic, he held precious talks with the Iranian officials.

Fors also called for development of joint research cooperation between Tehran and Stockholm.