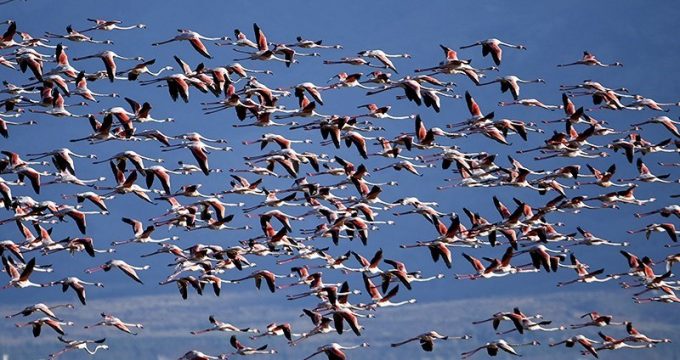 IFP – Some 10,000 flamingos that migrated to Urmia Lake months ago have delayed flying off to their next destination due to favorable weather and environmental conditions around the lake, as well as adequate food supply.

According to Omid Yousefi, the head of Wildlife Monitoring Office at West Azarbaijan’s office of the Department of Environment, these birds normally migrate from here to South Africa and the Persian Gulf region at this time of the year, but have chosen to stay put for now in Urmia Lake National Park, IRNA reported.

“Flamingos are spread across the park but can be mostly seen in the southern areas and at the mouth of Urmia’s tributaries, due to greater depths of fresher water sources,” he said.

The official said his office has received reports of birds traveling between the national park and Urmia’s seasonally-flooded wetlands, which are now filled with water.

“The province’s southern wetlands, such as Hassanlou and Kani Barazan, are also suitable places for these birds due to their abundant sources of food,” he said.

Flamingos are part of Urmia Lake’s biodiversity. Prior to the lake’s struggle with water shortage and seemingly inevitable desiccation, hundreds of thousands of these birds flew to the region each year. By some accounts, the lake used to host 100,000 to 200,000 birds in winter every year.

Located between the provinces of East and West Azarbaijan, Urmia Lake has been facing serious drought for years. Its desiccation is attributed to climate change and the long dry spell due to lack of rainfall, unrestrained damming and excessive water use, especially in the agriculture sector.

Restoration projects, however, are progressing well and the volume of water in the lake has more than doubled since 2013, when the Urmia Lake Restoration Program was launched by President Hassan Rouhani.

One of the largest hyper-saline lakes in the world, Urmia Lake is marked by more than 100 small rocky islands that are stopover points in the migration of various waterfowl, including flamingos, pelicans, spoonbills, ibises, storks, avocets, stilts and gulls.