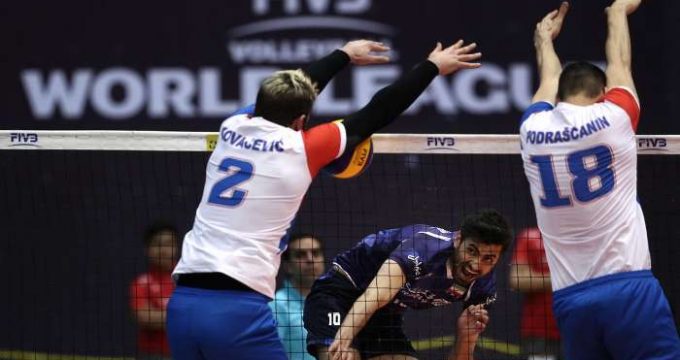 MNA – Men’s national volleyball team of Iran failed to overcome Serbia in Tehran to suffer their third defeat so far in the 2017 FIVB World League.

The Iranian squad had opened the second week of the international tournament with a 3-2 victory over Belgium on Friday. Persian volleyball players however conceded a 3-1 defeat against Serbian rivals on Saturday evening.

Serbians had the upper hand in the first two sets while Iran had a late start as the Persians demonstrated and outstanding and impeccable sportive performance in the third set which closed at 25-16.

Much to Iran’s chagrin, volleyball squad of Serbia came back to the game in the fourth set which came to an end with the same result as the third, this time in favor of the country from Europe’s Balkan peninsula though.

In the first week of 2017 FIVB Volleyball World League, Iran had also lost to Brazil and host Italy while ‎Igor Kolaković’s boys have so far overcome Poland and Belgium.