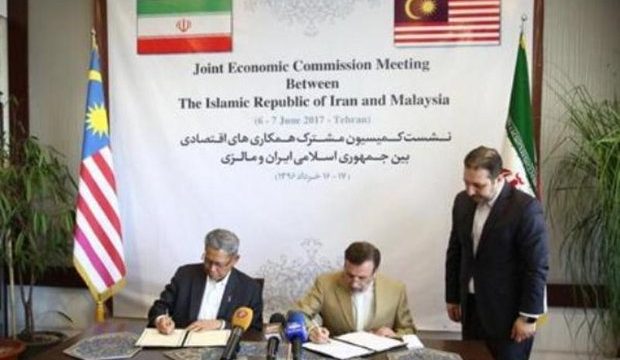 MNA – Malaysia’s industry minister has reported on establishment of a bureau on Tehran for exports of palm oil to Iran.

Malaysian Minister of International Trade and Industry is Mustapa Mohamed made the remarks during the MoU-signing ceremony of the Joint Economic Commission Meeting between Islamic Republic of Iran and Malaysia held in Tehran. The session was also attended by ICT Minister Mahmoud Vaezi who represented the Iranian side.

Malaysia’s Mohamed said agreements had been reached to form six working groups between the two countries adding “trade and industry, banking and finance, energy and environment ICT, transportation, tourism and health working groups will be formed in order to finalize the document of the Joint Commission.”

He pointed to significance of Tehran-Kula Lumpur ties and the last year visit of Iran’s President to the Southeast Asian country saying “during Dr. Rouhani’s visit, the two sides agreed on three areas of exchanging high-ranking officials, cooperation between central banks of Iran and Malaysia as well as increasing bilateral trade turnover by twofold.”

The official further referred to massive potentials of Iran’s market and Malaysia’s membership in Association of Southeast Asian Nations (ASEAN) stressing that Tehran and Kula Lumpur enjoyed a trade volume of 1.6 billion dollars in 2011 and the current figure of 700 million dollars can be raised to the 2011 one.

Mustapa Mohamed further highlighted that negotiations had kicked off on signing of a preferential trade agreement.

Industry minister of Malaysia described oil industry as yet another venue for cooperation between the two parties adding “PETRONAS and Al Bukhary receive support for conducting activities in Iranian oil fields and will take part in tenders.”

“A total of 5,000 university students and 15,000 tourists visit Malaysia annually,” noted the official maintaining that difficulties faced by Air Asia company are set to be resolved.

He also voiced optimism that exports to palm oil to Iran will rise hence the opening of a representative office in Tehran.

At the end of his remarks, the Malaysian minister for international trade and industry urged Iran to devise a plan for introducing its products to Malaysia’s market.