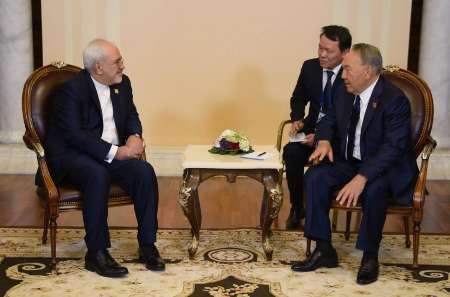 During the meeting, Nazarbayev stressed the need for boosting all-out ties between Iran as a major strategic partner and his country.

Referring to the growth of terrorism in the region, he called for extensive cooperation among regional states in the fight against the evil phenomenon.

Zarif, for his part, conveyed President Hassan Rouhani’s greetings and message of friendship and congratulated successful holding of the Shanghai Cooperation Council Summit and Expo 2017 international exhibition in the Central Asian nation.

Promoting ties with the neighboring nations in the region, is high on the Islamic Republic’s agenda, he said.

In this regard, Kazakhstan holds a special status among the regional, neighboring countries, Zarif said.