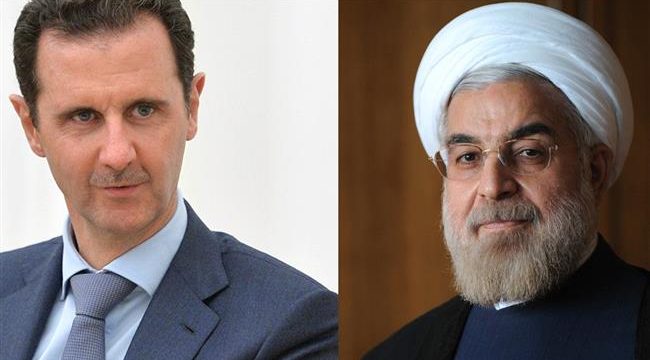 President: Iran, Syria on same side in war on terrorism

Tasnim – Iranian President Hassan Rouhani hailed the Syrian army and nation’s successive victories against terrorist groups, saying Tehran and Damascus are on the same front in the war against terrorism.

“The Islamic Republic of Iran and Syria are today in the same front against terrorism,” President Rouhani said in a telephone conversation with his Syrian counterpart on Thursday.

Describing a harsh battle against terrorism and restoration of stability and security to the region as the mutual goals of Iran and Syria, President Rouhani expressed the hope that Syrians would celebrate an ultimate victory against terrorist groups in the near future.

He also slammed the Wednesday terrorist attacks in Tehran as a cowardly action, stressing that such moves would only strengthen the Iranian nation’s resolve in countering terrorism.

Bashar al-Assad, for his part, condemned the twin terrorist attacks in Tehran, saying such measures reveal the weakness of Iran’s enemies.

Assad also expressed confidence that the Iranian nation will press ahead with the battle against terrorism and violence regardless of the recent hostile attacks.

The death toll from Wednesday’s attacks on the Iranian parliament building and the mausoleum of Imam Khomeini, claimed by Daesh (ISIL) terrorist group, grew to 17 on Thursday.

Meanwhile, Leader of the Islamic Revolution Ayatollah Seyed Ali Khamenei underlined on Wednesday that Iran will keep moving forward and the terrorist attacks will only result in stronger determination among Iranian nation.