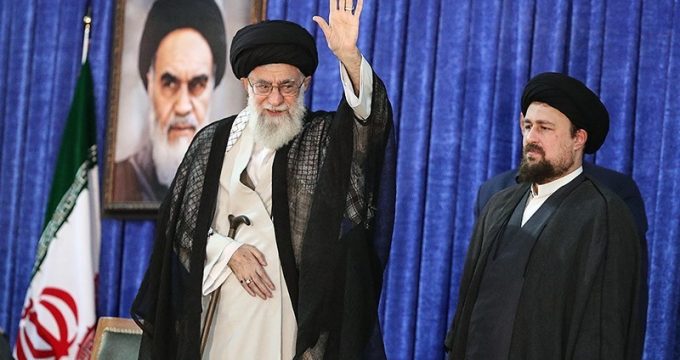 According to the Leader’s official website, Ayatollah Khamenei said a huge gathering at the late Imam mausoleum in southern Tehran, “See how obscene our enemy is! With a decadent, backwards tribal system, the US president stands by the head of the clan and performs a sword-dance. He, however, criticizes the vote of 40 million Iranians during their free election.

At this meeting Ayatollah Khamenei stressed that: The youth haven’t seen the great epic eras: they’ve heard about the times of the victorious revolution, the Sacred Defense era, the times of big action and great endeavors against separatists; yet, they need more of an explanation.

The Leader of the Revolution described the Islamic Revolution of 1979 led by Imam Khomeini as a complete victory, stating that: Previously, movements with minimal goals hadn’t been successful, but Imam (ra) did succeed with maximum goals. Those movements did achieve some success in the beginning, but they were finally defeated. Imam, however, gained a complete victory and kept it going forever.

Ayatollah Khamenei said at the ceremony honoring the late Imam Khomeini (ra): Islamic Revolution led by Imam Khomeini wasn’t only a transit of power; but a deep change in Iran’s social and political framework. Imam Khomeini’s political change meant defeating a dictator & client regime, then turning it into a ppl-oriented govt. An intellectual foundation of Imam Khomeini was ending US domination. This appeals to youth in countries whose governments have long ties to US. For example, if you talk to the youth in Saudi Arabia, you’ll see they hate depending on US.

His Eminence stressed that: Wisely challenging US has a lower price than appeasing it. Saudi government spent half its wealth on US interests to appease POTUS.

The Leader of the Revolution, today, said at the ceremony honoring the late Imam Khomeini (ra): See how obscene our enemy is! With a decadent, backwards tribal system, the US president stands by the head of the clan and performs a sword-dance. He, however, criticizes the vote of 40 million Iranians during their free election.

Ayatollah Khamenei slammed attacks on Yemen and said: Before us, we have enemies on this level of obscenity, indecency, and impropriety: they stand beside killers of Yemeni civilians (non-military) and speak of human rights. Can anything be obscener than that? The bombing campaign in Yemen has been ongoing– nearly 2.5 years. They are not targeting military sites, but bazaars, mosques, and residential buildings. The Innocent have perished… Then the aggressors give speeches on human rights, and put an embargo on the Islamic Republic of Iran on the basis of ‘human rights.’ Their shamelessness has no limitations.

The Leader of the Revolution added, sadly our brothers and sisters in Yemen, Bahrain, Syria and Libya are facing major problems while fasting in Ramadan. For 2.5 years Saudi government has been bombing Yemen, they will never win over Yemeni people if they bomb them for 20 years! We believe the enemy’s stage wars in Syria, Bahrain, Yemen-the Muslim world. Solutions are negotiation & terminating weapons transport.

Ayatollah Khamenei added, ‘A very important matter was that of the recent presidential elections. I thank every single one of those who participated in the elections, and casted more than 41 million ballots.’

On the elections results, His Eminence commented by saying: Fortunately, the Guardian Council approved the validity of the election result; however, irregularities must be prosecuted to avoid their repetition in the future–even though, these violations did not affect the final result. Those who did not win in the elections–unlike the previous presidential election in 2009, when those who were defeated caused some problems for the country–proved their high capacity for tolerance.