Tasnim – Iranian Foreign Minister Mohammad Javad Zarif criticized a move by several regional countries on Monday to cut off diplomatic ties with Qatar and said dialogue should be held among countries involved in the disputes.

“Neighbors are permanent; geography can’t be changed. Coercion is never the solution,” Zarif said on his Twitter account on Monday.

“Dialog is imperative, especially during blessed Ramadan,” he added in his tweet. 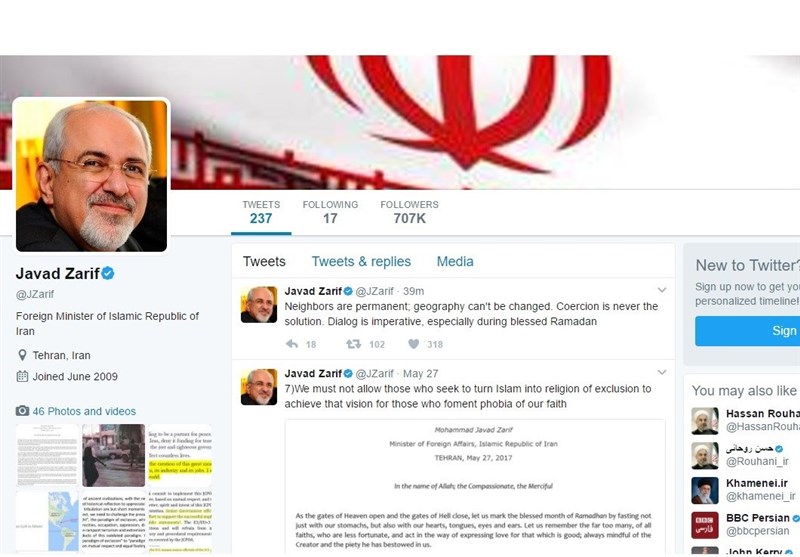 Saudi Arabia, Egypt, the United Arab Emirates and Bahrain, and later Libya and the Maldives, severed their ties with Qatar on Monday, accusing it of supporting terrorism and opening up the worst rift in years among some of the most powerful states in the Arab world.

Iranian Foreign Ministry Spokesman Bahram Qassemi also expressed Tehran’s concern over the rift among the Persian Gulf Arab states, urging them to resolve the tensions through “direct and transparent” talks instead of severing diplomatic ties.

“At a time when the (Middle East) region and the world are still suffering from broad consequences of terrorism and extremism and the continued occupation of Palestine by the Zionist regime, the escalation of tensions in relations between neighboring countries is not in the interest of any regional nations or governments,” he said.