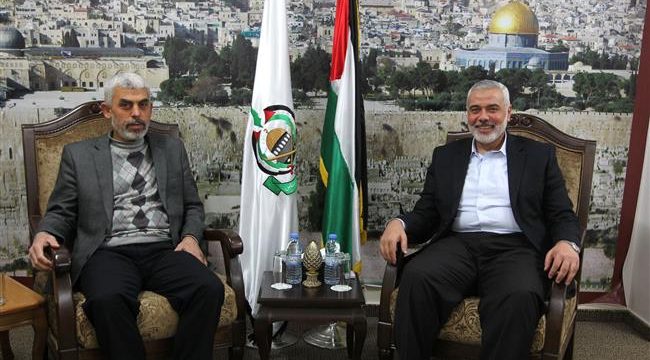 Hamas leader in Egypt for rare talks after spat

Press TV- A delegation from the Palestinian resistance movement Hamas, headed by the newly chosen leader in Gaza Yehiya Sinwar, has arrived in Cairo to hold the first high-level meeting with the country’s security officials after months of tensions.

Salah Bardaweel, an official within Hamas, said the three-member delegation crossed into Egypt on Sunday via the Rafah border crossing, the only passageway to the outside world for the besieged Gaza Strip which is mostly closed as part of an Israeli and Egyptian blockade.

Israel has been blockading Gaza since 2007 as a way of punishing its residents who voted for a Hamas administration. The blockade has caused a decline in the standard of living as well as unprecedented levels of unemployment and unrelenting poverty in the Palestinian coastal enclave.

Bardaweel said the Palestinian and Egyptian officials will discuss the humanitarian situation in the besieged Gaza Strip, Egypt’s role in making conditions better and the need to open Rafah crossing for Palestinian travelers.

Sinwar, a senior commander of Hamas’ military wing, was elected to head the movement’s political office in Gaza on February 13. He is second in rank only to the new chairman of Hamas political bureau, Ismail Haniyeh, who is also based in Gaza.

Ties between Hamas and Egypt have been tense in recent years as Cairo accuses the Palestinian resistance group of backing militants in Sinai Peninsula, an allegation strongly rejected by the movement.

Last month, Hamas dispatched forces to the Gaza Strip’s frontier with Egypt in a confidence-building measure aimed at boosting security in the border area. The deployment came as part of an agreement reached between the two sides in March.

In the Palestinian territories, however, a Gaza-based official said the Palestinian Authority had cut this month’s support payments for dozens of Hamas activists once imprisoned by Israel.

“The prisoners went to the banks today and found no salaries in their accounts,” Abdelrahman Shadid, who runs a Hamas-linked prisoner advocacy group in Gaza, said.

He said that those affected had been freed along with over 1,000 other Palestinian inmates in a 2011 prison swap deal with Israel.

The development comes nearly two weeks after a visit by US President Donald Trump to the occupied territories.

The US and Israel are exerting pressure on Abbas to halt the monthly payments to thousands of current and former detainees who were jailed for actions linked to the Israeli-Palestinian conflict.

Some 6,500 Palestinians are currently being held in Israeli jails, 536 of them arbitrarily, according to figures provided by the Palestinian prisoners’ rights group Addameer in January. Palestinian inmates complain that they have been subjected to assault and torture at Israeli prisons.