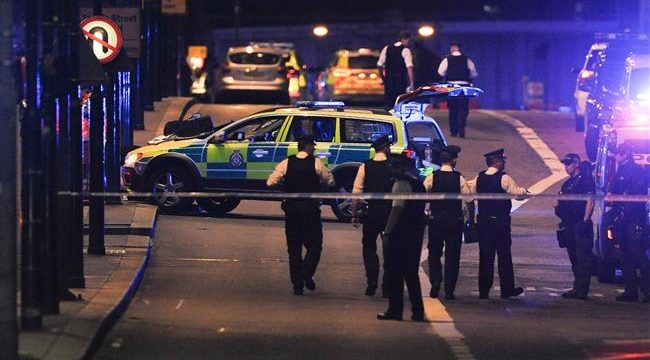 9 dead, including 3 attackers after terror attack in London

The attack took place late Saturday night when a white van veered off the road and mowed down pedestrians on London Bridge.

The drivers then got off the vehicle and began stabbing people with large knives in the Borough Market area of bars and restaurants.

“Sadly, six people have died in addition to the three attackers shot by police,” Rowley said.

“The suspects had been confronted and shot by police within eight minutes of the first call. The suspects were wearing what looked like explosive vests but these were later established to be hoaxes,” he added.

According to London Ambulance Service, 48 people were taken to hospital for treatment and a number of other patients were treated for less serious injuries in the center of the city.

British Prime Minister Theresa May said, “Following updates from police and security officials, I can confirm that the terrible incident in London is being treated as a potential act of terrorism.”

“This is a fast moving investigation… I want to express my huge gratitude to the police and emergency services who are on the scene. Our thoughts are with those who are caught up in these dreadful events.”

“Police are dealing with a major incident and all routes are being diverted,” Transport for London said on Twitter.

A large area of central London remained cordoned off, with police asking people to avoid the area.

Bursts of gunfire could be heard through the streets, likely from armed police with at least three blasts ringing out as police performed controlled explosions.

The attacks come days ahead of a June 8 election and less than two weeks after another terrorist attack left 22 people dead and scores of others injured at a pop concert by US singer Ariana Grande in Manchester in northern England.

It has been the deadliest act of terror in Britain in over a decade.