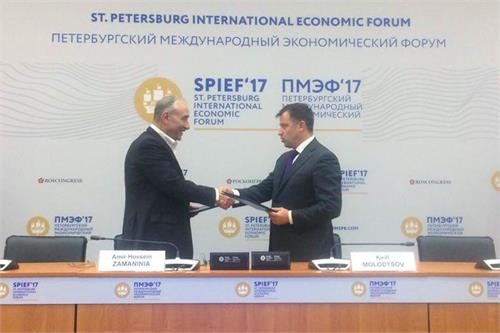 The roadmap was provided based on the superior level of cooperation between the two countries with emphasis on fruitful activities in energy grounds.

Active interaction of Iranian and Russian companies aimed at enhancement of trade cooperation in the mid-term has been stipulated by the document.

Tehran hosted the Russia-Iran Business Forum back in December as part of efforts to promote the St. Petersburg International Economic Forum, which will be held in St. Petersburg on June 1–3, 2017.

Deputy Minister of Petroleum for International Affairs and Trading Amir-Hossein Zamaninia as well as Iranian Ambassador to Moscow Mehdi Sanayee took part in the general and expert meetings of St. Petersburg forum.

The St. Petersburg International Economic Forum discussed a wide range of topics on international challenges including economic and social issues, the situation in the Middle East, regional crises, the future of the world, and relations among countries.

Russian President Vladimir Putin will also participate in the forum.