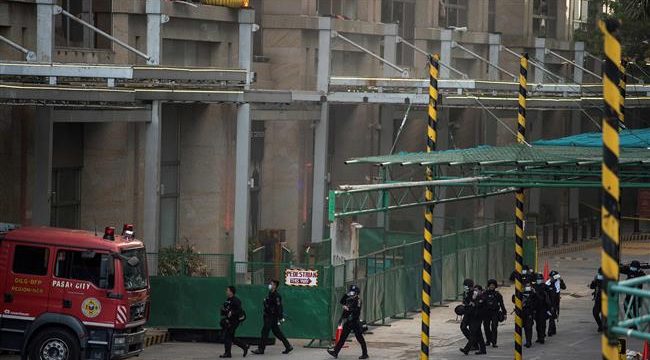 Press TV – Dozens of people have been killed at a casino-hotel complex in the Philippine capital, Manila, after a masked gunman stormed the place overnight, firing shots and setting the place on fire.

The drama began after midnight (1600 GMT) Resorts World Manila across from the country’s international airport.

Presidential spokesman Ernesto Abella said Friday that at least 36 dead bodies were found inside the building following the attack, saying most of the victims died from suffocation.

Dozens of other people were also injured in a stampede as people rushed to leave the hotel.

After setting the building alight, the assailant, a suspected foreigner who was armed with an automatic rifle, initially vanished into the chaos of smoke and running people, prompting a manhunt throughout the building.

However, he was later found dead, with police saying he had committed self-immolation.

“He burned himself inside the hotel room 510,” national police chief Ronald dela Rosa told a media conference, adding, “He lay down on the bed, covered himself in a thick blanket and apparently doused himself in gasoline.”

Police said the incident was not terror-related and the gunman made a failed robbery attempt.

“For now, we can say that this is not an act of terror. There is no element of violence, threat or intimidation that leads to terrorism,” Dela Rosa said.

The presidential spokesman also said, “All indications point to a criminal act by an apparently emotionally disturbed individual,” adding, “Although the perpetrator gave warning shots, there apparently was no indication that he wanted to do harm or shoot anyone.”

Authorities are still looking into the incident.

Earlier, US President Donald Trump said Washington was closely monitoring what he described as a “terrorist” attack unfolding in Manila.

Witnesses inside the hotel recounted feelings of panic and terror when the shooting assault took place.

“When we smelled smoke, we decided to go for the exit in the carpark. That’s where we got out. Before we exited, we heard two gunshots and there was thick smoke on the ground floor,” said Maricel Navaro, an employee at the resort.

The incident comes a week after Philippine President Rodrigo Duterte imposed martial law across the southern region of Mindanao to crush what he said was a rising threat of Daesh terrorists there.

The country has been on high alert after militants went on a rampage through the southern city of Marawi, about 800 kilometers (500 miles) south of the capital.

Philippine security forces are still engaged in battles against the militants in Marawi. The clashes have left at least 171 people dead in the region.

Duterte has said he may need to declare martial law across the rest of the country if the terrorism threat spreads.