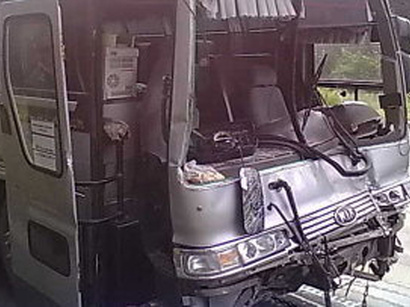 Fire at Pakistani pilgrims bus in Iran, All passengers safe

IRNA – A bus carrying 42 visiting Pakistani pilgrims caught fire on Wednesday 150 km from the provincial capital city of Mashhad but none of the passangers was hurt in the incident.

According to a local police officer, “The incident happened at 6:00 pm local time (13:30 GMT) when the Volvo bus leaving Mashad for Mirjaveh border point near Pakistan caught fire in the Torbat Heidariyed-Ganaveh road.

None of the 42 passengers, including 25 women, was hurt, thanks to the skillful driver of the bus and the timely presence of the police officers in the site of the incident, Colonel Hadi Omidvar told IRNA.

“The reason of the incident was a problem in the braking system of the bus,” he added.

Torbat-e Heydarieh is a town in the northeastern Iran near the Afghan and Turkmen borders and lies some 150 km south of Mashad.