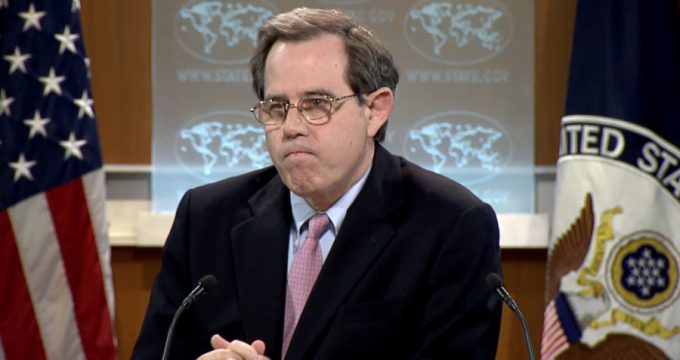 State Dept stumped over why US criticizes Iran on democracy, but not Saudi Arabia

RT– This could be the most uncomfortable State Department press briefing moment yet.

During a press conference about US President Donald Trump’s recent trip to the Middle East, AFP journalist Dave Clark asked a department official why the US criticizes the Iranian elections and its record on democracy, but not Saudi Arabia.

“How do you characterize Saudi Arabia’s commitment to democracy, and does the administration believe that democracy is a buffer or a barrier against extremism?” Clark asked.

Stuart Jones, acting assistant secretary for Near Eastern Affairs, took a full 19-second pause before responding with a brief comment, saying that during this trip, the US made “significant progress with Saudi and GCC partners in both making a strong statement against extremism”.

@DaveClark_AFP Good God. That’s the longest pause I’ve ever seen from a us official

@shadihamid It was pretty awkward being there, especially as I wasn’t trying to embarrass Jones himself