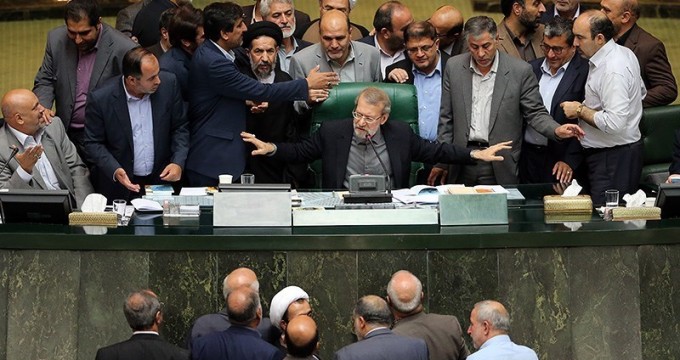 Has the honeymoon between reformists and moderate principlists come to an end?

Iranian Diplomacy- The Saturday morning front page of Reformist newspapers covered a story which came as a surprise to many who are following Iranian politics.

Apparently, this year’s internal Majles election has turned into an arm-wrestling between the pro-reform caucus and a coalition of hardliner Principlists with the so-called independents. The bloc advocating current Speaker Ali Larijani, most of whom were voted in through placement in Reformist-brokered lists, have been lobbying with hardliner Paydari front MPs to push out pro-reform parliamentarians from the board of directors, including two deputy speakers Massoud Pezeshkian and Ali Motahari.

The majority pro-reform bloc, which calls itself Omid (=Hope), is thus forced into reaction. As the caucus’ leader Mohammadreza Aref has stated, the bloc’s redline is to maintain the status quo lineup and keep Motahari and Pezeshkian in the board. The pro-reform MPs were originally expected to align themselves with Larijani’s team but the latter changed the game when it became engaged in match fixing with Paydari. Two of Larijani’s allies, namely Kazem Jalali and Behrouz Ne’mati have reportedly met Paydari’s Hamidreza Haji-bababei and Mojtaba Zolnouri, deciding to give out a joint twelve-man list with none of the Hope bloc members included.

Pro-reform Etemad daily has quoted an unnamed official of the Hope caucus, saying the bloc has had four meetings with the Larijani team. According to the official the bloc had accepted two of their proposals, one with a 4-4-1 lineup (four for each side and one from the women’s bloc without replacement of the speaker and its deputies) and another with the same arrangements except for a the 1, supposed to be from an impartial side. When Kazem Jalali told the Parliament’s news agency, Khaneh Mellat, that the reformist bloc had failed to attend talks, the Hope caucus spokesperson Bahram Parsaei fired back, threatening to publish a list of MPs voted in through Hope lists but failing to remain loyal. The last proposition put forward by Larijani himself was equal shares of the 9 positions shared between Paydari, the independents, and the Hope blocs, with the condition lthat one deputy speaker be from the Principlist bloc, namely Hamidreza Hajibabaei, former education minister under the Ahmadinejad administration and supporter of Ebrahim Raisi in the recent presidential race.

The deputy speaker targeted to step down from the board of director was rumored to be the vocal centrist Ali Motahari, whose attendance in a recent meeting with former President Mohammad Khatami, under an imposed media blackout, had already met severe criticism from hardliners.

The elimination of Ali Motahari from the board of directors is not unanimously backed in the Principlist faction either. Gholam-ali Jafarzadeh Imenabadi, the deputy director of the bloc, has told Iranian Labor News Agency (ILNA) he would do his utmost to defend Motahhari, an “embodiment of liberty”. Some pro-reform lawmakers have also complained about lobbying by some ministers, including Communication Minister Mahmoud Alavi. The administration has denied reports of involvement.

Shargh daily has consulted veteran MP Gholamreza Heidari who finds Motahari’s position invaluable. “The [Hope] caucus is not compromising on Motahari’s deputy speakership. In the past, we have seen Principlists who have, in practice, turned into outstanding reformists. We have also seen good coordination from Mr. Larijani. On the other hand however, we have seen conduct indicating that some MPs are not willing to accept the reality of the Reformists and moderates close to them. Mr. Motahari is the Hope caucus’ redline. It is long been heard that they want to eliminate him and we will react if this goes on. Our general conclusion made recently was to maintain the status quo lineup in the board of directors but if they are going to have another plan, we will issue a full 12-man list. If they fail to see the situation and pursue their totalitarianism, there is a good likelihood that Mr. Larijani be eliminated,” Shargh’s full quote of Heidari reads.

Partly because of the pressure from the voter base who had launched hashtags on their social media attacks in defense of deputy speaker Ali Motahari and partly because of what they saw as a collusion between Larijani and Paydari, the pro-reform bloc was drawn to confrontation. The bloc has promised to issue an independent 12-man list for all the chairs available in the board of directors, led by Massoud Pezeshkian as their candidate for Speakership.

As Etemad noted in an article dedicated to the issue, none of the three blocs in the parliament, Reformists, Principlists, independents, enjoys a majority but the lineup has given the Larijani advocates an advantage. Though a minority, they can turn every situation into their own interest by leaning toward either of the major blocs at crucial times.

There are about forty independent lawmakers, whose swing votes remain a challenge for the Reformist bloc. Despite claiming to have won a majority of the seats in the parliament, the Hope caucus failed in the first weigh-in when the parliament voted for Larijani as Speaker.