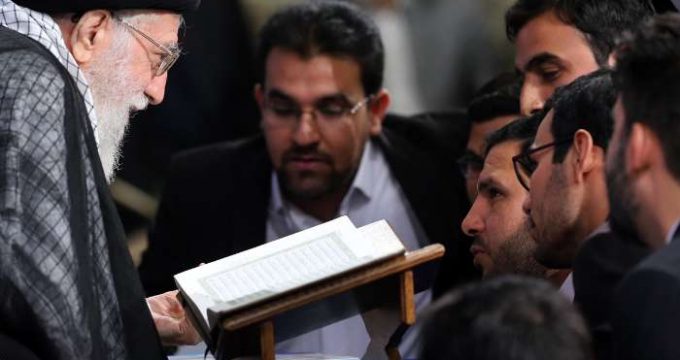 Saudi regime believes in Quran only in appearance: Ayatollah Khamenei

Press TV – Leader of the Islamic Revolution Ayatollah Seyyed Ali Khamenei says “incompetent” Saudi rulers believe in the Quran only in appearance but act in contravention of its teachings.

“Unfortunately today, the Islamic society, like other societies, has faced problems and the fate of some Islamic societies is in the hands of incompetent individuals like [those] in the Saudi government,” Ayatollah Khamenei said in a Quranic meeting on Saturday.

“These individuals believe in the Quran in appearance and even print millions of copies of the Quran but they are in practice intimate with infidels contrary to Quran’s stipulations,” Ayatollah Khamenei added.

The Leader slammed the ongoing anti-religious acts in Yemen and Bahrain and said those who are carrying out such measures against Muslims are “illegitimate” and will certainly face failure and doom.

The time of their collapse depends on the actions of Muslims, the Leader said, adding that if the Muslim world acts correctly, their collapse would be accelerated.

Ayatollah Khamenei stated that some reactionary countries falsely assume that they can establish cordial relationship with enemies of Islam but “the fact is that there is no [such] intimacy.”