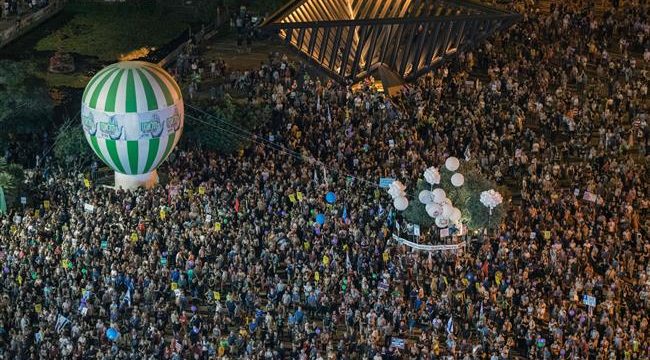 Press TV – Thousands of Israelis have staged a protest rally in Tel Aviv to express their support for an independent Palestinian state, condemning 50 years of Israeli occupation of the Palestinian territories.

Israeli NGO Peace Now, one of the organizers of the demonstration, said the event was meant to denounce the lack of hope being offered by a regime “perpetuating occupation, violence and racism”.

“The time has come to prove to the Israelis, the Palestinians and the entire world that an important segment of the Israeli population is opposed to occupation,” said Peace Now head Avi Buskila.

The demonstrators also waved Palestinian flags while Palestinian President Mahmoud Abbas sent a message of support which was read out at the protest.

Israeli opposition Labor Party leader Isaac Herzog also addressed the event and backed the idea of an independent Palestinian state as a solution to the decades-long conflict.

Herzog accused Israeli Prime Minister Benjamin Netanyahu of having missed the opportunity to move forward with a “peace” process.

“The leadership in Israel today is driven first and foremost by fear. Fear of change; fear of daring; fear of initiative and fear of hope. Israel’s prime minister is the chief fear-monger,” he said.

Over half a million Israelis live in over 230 settlements built illegally since the 1967 occupation of the Palestinian lands.

The continued expansion of Israeli settlements is a major obstacle to the establishment of peace in the Middle East and violates anti-settlement United Nations Security Council Resolution 2334.

Earlier this week, US President Donald Trump traveled to the occupied territories and met with Netanyahu after dropping decades-old US commitment to the establishment of a Palestinian state.

Israel’s expansion of settlements in occupied territories has dealt a serious blow to Palestinian hopes to establish an independent state. Heartened by Trump’s election, Israel unveiled plans in April to build 25,000 settler units in Jerusalem al-Quds.