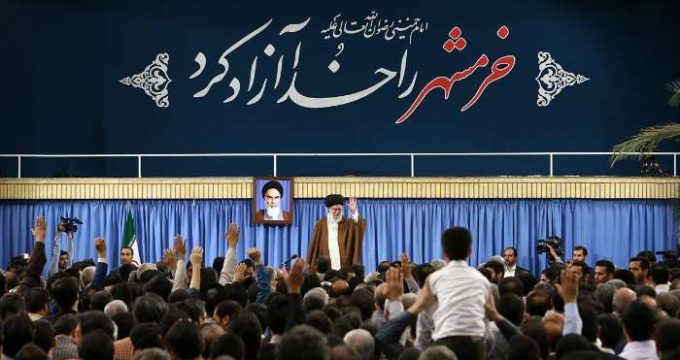 US, Soviets, and regional reactionaries fought against Iran for 8 years: Leader

IRNA – During the Iraqi imposed war against Iran, all global powers including the US, NATO, former Soviet Union and regional reactionaries stood against Iran but” we succeeded to overcome all of them,” said the Supreme Leader.

Supreme Leader of the Islamic Revolution Ayatollah Seyyed Ali Khamenei made the remarks in a meeting on Wednesday evening with a group of wartime commanders and veterans as well as the artists who created works to remember the memories of the eight years of Iran’s Sacred Defense against Iraq’s imposed war against the country from 1980-1988.

The meeting was held on the occasion of the 35th liberation anniversary of the southern city of Khorramshahr during the Sacred Dense era on May 24.

Occupied by Iraqi troops in the early days of the eight-year Iraq’s imposed war against Iran, Khorramshahr was finally liberated on May 24, 1982, after two days of heavy fighting and sacrifices made by the Iranian forces.

‘Depicting memories of the eight year imposed war and the use of artistic, literary, and innovative methods in order to transfer them on to newer generations is highly prized and important,’ said the Leader while stressing, “Do not let the Sacred Defense era be forgotten.’

“Do not let the miraculous event of the Sacred Defense be forgotten; some are motivated to weaken this feature in the reality of our lives and our minds, those who plan for Islamic countries and oblige them, and they agree to remove the issue of jihad and martyrdom from the curriculums of religious education, schools and universities; this has been ordered. They have been told to remove the issue of jihad and martyrdom, and they have agreed and felt obliged to,’ added Ayatollah Khamenei.

The Leader added, ‘The same motives thrive in the country and can be seen through some cultural policies. They should not be ignored. Keep the Sacred Defense era and martyrdom alive.’

He hailed artistic methods for passing on memories of the Sacred Defense era to the young generation.