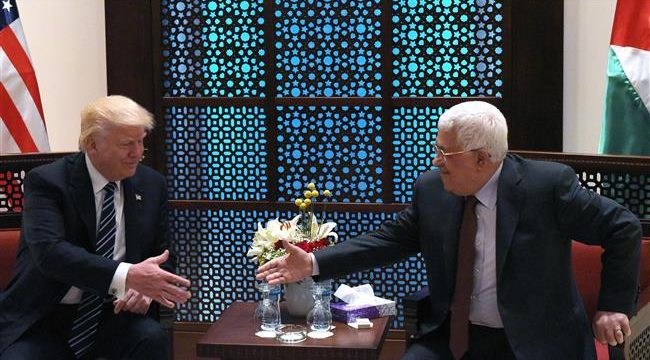 What did Trump seek in his West Asia trip?

Alwaght– Seven months after winning the presidential election Donald Trump visited the West Asia region, with this foreign policy still covered by ambiguity, including his approach towards the issue of occupied Palestinian territories.

As a second station of his regional visit, the American leader visited the occupied Palestine. His Tel Aviv visit came after Saudi Arabia, the president’s first station, sent positive signals to the Israeli side, promoting the idea of diplomatic normalization with the Israelis among the Arab and Muslim leaders.

While Trump’s policy on the Palestinian cause is vague and all sides expect to see the his established approach towards the ling-standing issue, signals he sent during his presidential campaign can help understand what will he do to address the issue.

One of these signals was raising the idea of the US embassy relocation from Tel Aviv to Al-Quds (Jerusalem), though it is on hold now. Another one was his pro-settlement stances, and criticizing the United Nations rare objections to Israeli violations against the Palestinians and their lands. Another signals the  American real estate mogul set were picking Jewish figures in his administration including some who fund the Israeli settlement building in the West Bank and Al-Quds, and declaring that he did not necessarily support the two-state solution for the Israeli-Palestinian conflict.

Just before Trump’s trip, Israeli Prime Minister Benjamin Netanyahu tried to ease down tensions with Palestinians for a while; while the president of the Palestinian Liberation Organization (PLO) Mahmoud Abbas intensified his pressures on the Palestinians in the Gaza Strip for more than a month in a bid to court the American president. The Abbas escalation campaign majorly targeted the Hamas resistance movement in a show of commitment to confrontation of what the US labels terror.

The question that comes down here is that did the American businessman have any new solution to the conflict just different from his predecessors?

In order to answer this question one must take into account the regional and international conditions. Right now, the conditions are not moving in favor of the Palestinians and there are not smallest strains on the American administration to press the Israeli regime to, at least minimally, observe the Palestinians’ rights.

At the same time, the PLO holds no play cards to push, through the American mediation, Tel Aviv leaders for responses to its demands.

The new American plan that Trump seeks to materialize does not consider the Palestinian rights, rather it is an Israeli-designed project working against the Palestinians’ rights. It aims at completely strip Palestine of its Arabic nature. The project is normalization of diplomatic relations between the Israeli regime and the Arab countries.

The American president sought restarting the peace process by meeting both the Israeli and Palestinian leaders. The peace efforts can focus on negotiation for negotiations without any pressures on the Israeli side to halt its illegal settlement expansion to bow to the conditions set formerly by Mahmoud Abbas for the resumption of peace talks.

Additionally, the Palestinian president has reportedly made concessions, including giving lands in West Bank to the Israeli side, to push for realization of two-state initiative.

Providing some aids to the West Bank-based Palestinians

In case of resumption of so-called peace talks between PLO and the Israeli regime, the American president will likely agree to provide some aids to the Palestinian side to show off as being fair to the Palestinians in terms of considering their rights, appease the PLO and persuade it to engage in negotiations, and decorate the diplomatic normalization for the Arab regimes.

The American president initiated the escalation against Iran during his Riyadh visit, and reignited it while in Tel Aviv. A deal appears to have taken place behind the scenes: the US tried to convince Saudi Arabia that it still has the US support in exchange for diplomatic normalization with the Israeli regime. This was beside the benefits Washington made through signing mega-arms deal with Riyadh.

In short, Trump visit came as a reiteration to the Arab-Israeli diplomatic normalization attempts. For normalization process to go ahead, Trump needs to reignite the Palestinian-Israeli negotiations. The future is likely to see renewed talks between both sides. Tel Aviv will possibly use the negotiations to press ahead with its settlement building, repair its damaged face globally, and show off as a peace seeker in the eyes of international community.