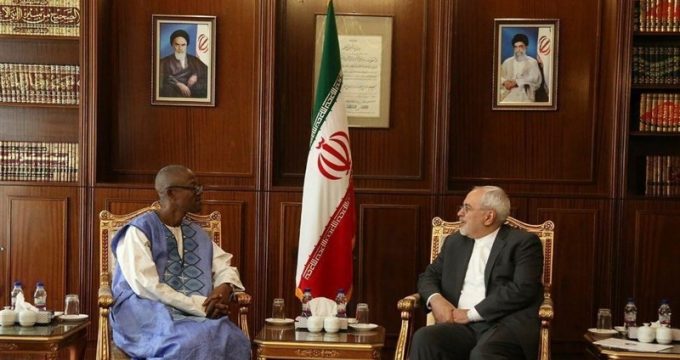 Tasnim – A ranking Sierra Leonean diplomat voiced the African country’s enthusiasm for close ties with Iran in all fields, especially in the economic arena.

The Freetown government is eager to boost relations with Iran in all fields, the minister of state at Sierra Leone’s Ministry of Foreign Affairs and International Cooperation, Mohamed Gibril Sesay, said in a meeting with Iranian Foreign Minister Mohammad Javad Zarif in Tehran on Wednesday.

Highlighting the African nation’s willingness to get the most out of Iran’s economic capacities, the visiting diplomat called for the implementation of an economic cooperation agreement that Iran and Sierra Leone signed back in 2015.

He further hailed Iran’s role in creating stability and security in the Middle East, saying Sierra Leone is ready to work with Iran in the war on terrorism and extremism.

Zarif, for his part, described closer ties with Africa as one of Iran’s top foreign policy priorities, noting that Tehran and Freetown can boost economic interaction under “practical mechanisms” during Iranian President Hassan Rouhani’s second term.

He also stressed the significant role that Iran and Sierra Leone’s private sectors and chambers of commerce could play in the enhancement of tared ties.