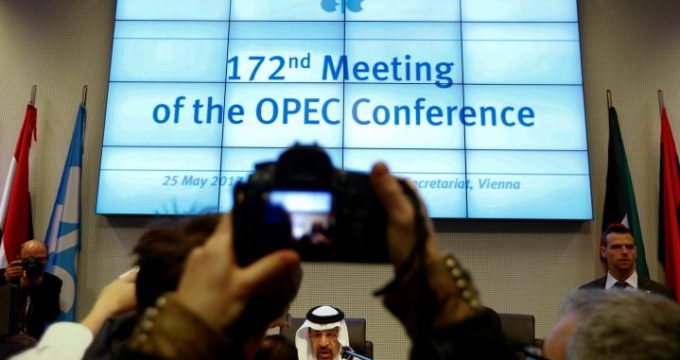 Reuters– OPEC decided on Thursday to extend cuts in oil output by nine months to March 2018, OPEC delegates said, as the producer group battles a global glut of crude after seeing prices halve and revenues drop sharply in the past three years.

The cuts are likely to be shared again by a dozen non-members led by top oil producer Russia, which reduced output in tandem with the Organization of the Petroleum Exporting Countries from January.

OPEC’s cuts have helped push oil back above $50 a barrel this year, giving a fiscal boost to producers, many of which rely heavily on energy revenues and have had to burn through foreign-currency reserves to plug holes in their budgets.

Oil’s earlier price decline, which started in 2014, forced Russia and Saudi Arabia to tighten their belts and led to unrest in some producing countries including Venezuela and Nigeria.

The price rise this year has spurred growth in the U.S. shale industry, which is not participating in the output deal, thus slowing the market’s rebalancing with global crude stocks still near record highs.

OPEC oil ministers were continuing their discussions in Vienna. Non-OPEC producers were scheduled to meet OPEC later in the day.

In December, OPEC agreed its first production cuts in a decade and the first joint cuts with non-OPEC, led by Russia, in 15 years. The two sides decided to remove about 1.8 million barrels per day from the market in the first half of 2017, equal to 2 percent of global production.

Despite the output cut, OPEC kept exports fairly stable in the first half of 2017 as its members sold oil from stocks.

“There have been suggestions (of deeper cuts), many member countries have indicated flexibility but … that won’t be necessary,” Saudi Energy Minister Khalid al-Falih said before the meeting.

He added that OPEC members Nigeria and Libya would still be excluded from cuts as their output remained curbed by unrest.

OPEC sources have said the Thursday meeting will highlight a need for long-term cooperation with non-OPEC producers.

The group could also send a message to the market that it will seek to curtail its oil exports.

“Russia has an upcoming election and Saudis have the Aramco share listing next year so they will indeed do whatever it takes to support oil prices,” said Gary Ross, head of global oil at PIRA Energy, a unit of S&P Global Platts.

OPEC has a self-imposed goal of bringing stocks down from a record high of 3 billion barrels to their five-year average of 2.7 billion.

“We have seen a substantial drawdown in inventories that will be accelerated,” Falih said. “Then, the fourth quarter will get us to where we want.”