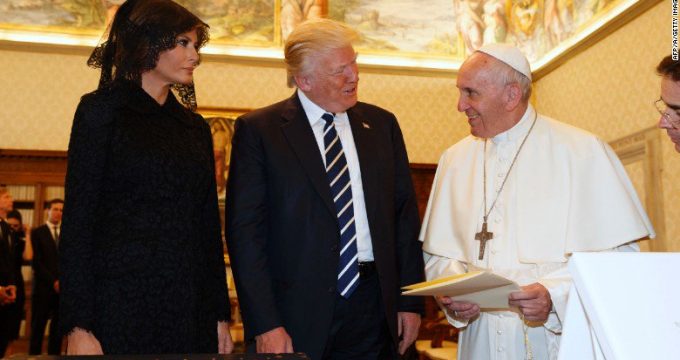 Press TV- US President Donald Trump has met with Pope Francis at the Vatican, as a group of people hold protests against his controversial policies at a site close to the US Embassy in the Italian capital, Rome.

Trump met Pope Francis in a short private audience at the Vatican on Wednesday. He arrived for the meeting along with his wife Melania, daughter Ivanka and son-in-law Jared Kushner.

Trump had earlier arrived at Rome’s Leonardo da Vinci airport, where he was greeted by Italian Foreign Minister Angelino Alfano.

On the third leg of his first international trip since taking office, Trump will stay less than 24 hours in Italy, where he is scheduled to meet Pope Francis at the Catholic Church’s headquarters before flying to Brussels on Wednesday.

After his meeting with the Pope, Trump will hold brief talks with Italy’s President Sergio Mattarella and Prime Minister Paolo Gentiloni. He will return to Italy on Thursday for a summit of the Group of Seven (G7) major industrialized nations in Sicily.

Meanwhile, a group of people took to the streets in Piazza Bologna, close to the US Embassy, where Trump is staying during the visit.

They were holding banners reading “Rome resists” while chanting slogans like, “No hate, no fear, refugees are welcome here” and “Hands too small, can’t build a wall.”

Trump “does not respect his office, he doesn’t respect the rule of law, and we are just not going to sit back even though we are 500 miles away from Washington,” said Robert Samors, an organizer of the protest.

Another protester described Trump as “the essence of all the worst things,” saying that people like Trump “should not be met. By meeting them, you change nothing about their way of thinking.”

During his presidential campaign, Trump vowed to build a wall between the US and Mexico to prevent migrants from entering his country. The then-presidential candidate was harshly criticized by the Pope, who said at the time that a person who “thinks only about building walls … is not Christian.”

Trump in return called the Pope’s remarks as “disgraceful” and said no man had the right to question another man’s faith.

Before arriving in Italy, Trump had been to Saudi Arabia and Israel.