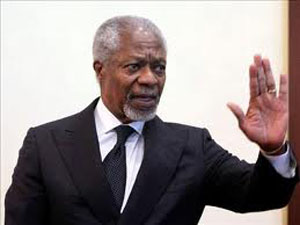 AP | EDITH M. LEDERER: Former U.N. chief Kofi Annan said Tuesday that U.S. President Donald Trump should reach out and talk to Iran, which by signing a nuclear deal with six major powers and re-electing President Hassan Rouhani is trying to reach out to the world.

Annan, who heads a group of former leaders founded by Nelson Mandela called The Elders, said if he had the chance he would tell Trump his antagonistic policy toward Iran, including labeling it the enemy and a purveyor of terrorism, isn’t going to do anything to bring peace to the Middle East.

He said in a telephone interview with The Associated Press that “Iran is part of the solution” to the conflicts in the Middle East, including Syria and Iraq, “and we cannot get away from that fact.”

The Elders put out a statement Tuesday welcoming Rouhani’s re-election “as a sign that the Iranian people clearly desire peaceful relations with the outside world and a more tolerant society at home.” They reiterated support for the 2015 nuclear agreement with six major powers including the U.S. and expressed hope that “his re-election means all signatories will continue to work in good faith for its full implementation.”

During his current Mideast trip, Trump has been urging Arab leaders to join Israel in opposing Iran, citing its destabilizing activities in Syria, Iraq and Yemen. He got a VIP reception in Saudi Arabia, Tehran’s longtime foe, and from the predominantly Sunni countries at the summit in Riyadh that are traditional rivals of predominantly Shiite Iran.

But Annan said Trump should reconsider his approach to the Middle East, which is a region with lots of conflicts, tensions and difficulties.

Annan said he would also Trump that the U.S. should honor the nuclear agreement, which he called a “good” deal. And he would also tell him “it is important to reach out and talk to Iran.”

So if Trump is prepared to meet Kim, he said, “I can’t understand why he can’t go to Iran, a nation that by signing the agreement is also trying to open up and reach out to the broader world – and that should be encouraged rather than be pushed the other way.”

Annan said it’s difficult to predict what might happen if Iran is pushed too far, “but what we should learn is that it wasn’t sanctions, it wasn’t tough actions, that brought the nuclear agreement – it was engagement.”

“He should go in that direction,” he said.

Annan also said efforts should be made to bring Sunnis and Shiites together to overcome their historic differences.

“It is difficult. It is longstanding. But enmity between groups and societies need not last forever,” he said.