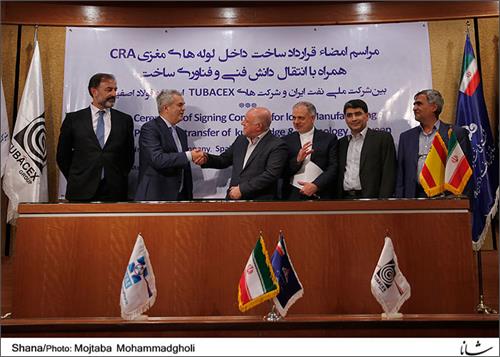 AP– Iran on Wednesday signed a deal worth $615 million – or euros 550 million – with a Spanish-Iranian consortium under which the group will provide pipes used in Iran’s oil industry.

It was the first major deal for Iran’s oil industry since President Hassan Rouhani’s re-election last week to another term in office on a platform of reform and greater openness to the international community. The consortium, which includes Spain’s Tubacex S.A. and Iran’s Foolad Isfahan Company, will produce pipes made of a corrosion resistant alloy for a network of 600 kilometers, or about 370 miles, over three years.

The statement said the pipes will be produced using Japan’s JFE Steel Corporation technology, and that the know-how will eventually be given to the Iranians.

At a ceremony marking the signing, Iran’s Oil Minister Bijan Zanganeh said he was “delighted that a deal worth more than 550 million euros is being signed.”

“The Iranian manufacturer is happier than us and perhaps our foreign partner is the happiest party of all today, to have secured itself a long-term market” in Iran, Zanganeh added.

The minister said that during the years of punitive sanctions over Iran’s nuclear program, the industry faced a severe shortage of pipes and were the sanctions still in place, “we would be unable to produce them now.”

“I think it is the biggest tender we have had in this industry for a lot of years,” said Antonio Rafael, deputy CEO of Tubacex. “It is very professionally managed.”

Iran has been trying to renovate its oil industry since the 2015 landmark nuclear deal with world powers. The country exports 2 million barrels of oil per day, which compromises more than 30 percent of the country’s annual budget.