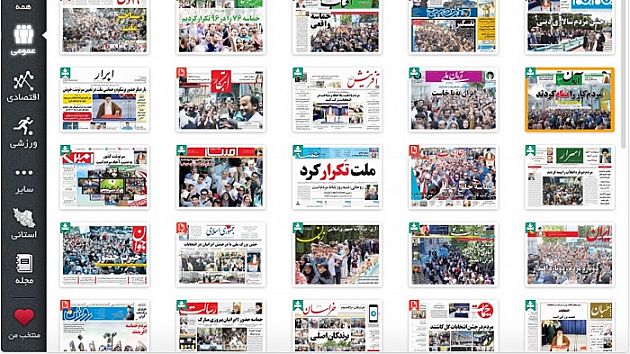 The Day After: Reading between the headlines to guess the next Iranian president

Iranian Diplomacy- Friday was the most frantic election day Iran has seen in its history, with reports of long queues formed at ballot boxes, occasionally snaking through several streets outside the voting center, hogged the media’s attention.

On social networks, Principlists media submitted back to back complaints about shortage of voting cards, which had kept many waiting, sometimes without the chance to vote, in smaller towns and villages, especially in Khorasan region, thought to be a stronghold for conservative candidate Ebrahim Raisi, the major rival to moderate candidate and sitting president Hassan Rouhani.

In Tehran, the complaint was not about shortage of ballots, but the supertardy process of vote-taking, which had held large groups waiting outside the voting centers waiting for their turn to cast votes. While the voting deadline was extended from 6 PM to 12 PM, eventually many had to leave the voting stations without having the chance to register their vote and record probably the highest rate of participation in Iran’s presidential election. This year’s presidential election’s voter turnout was 77 percent, less than the record 88 percent registered at the heated, later turned controversial, 2009 presidential election between Mahmoud Ahmadinejad and his Reformist rivals.

With initial results being announced from 8:30 AM on Saturday, first day of the week in the Iranian calendar, newspapers published on the day after the election had little to provide on facts and figures of the election or provide any forceful analysis; however, for those familiar with the ethos of Iranian newspapers, the headlines were telling enough to know which group considered itself triumphant and which side had quietly accepted defeat.

Pro-Rouhani media, Reformist and moderate, had a victorious vibe. “People Finished the Job” said the sensationally Reformist daily Arman. The front page was occupied with a picture of the massive crowed gathering to vote at Hosseiniyeh Ershad, religious center and temporary voting station which turns into a politician- and media-magnet in every election, where crowds had gathered to vote. E’temad, a prominent Reformist newspaper, was more playful in its front page. “The Nation Repeated”, read its top headline, alluding to the last week message by ex-president, the Reformist Mohammad Khatami, in which he encouraged followers to ‘repeat’, takrar in his own provincial accent, their February 2016 parliamentary victory by voting for Rouhani. The front page of Shargh, the other prestigious Reformist daily, boasted picture of a large crowed of voters holding up ID cards and flyer-sized photos of Mohammad Khatami, who faces a media blackout upon judiciary order. “Rouhani, the Victor of the Election” read the newspaper’s editorial, arguing that whatever the outcome of the election, Rouhani had won the competition while his Principlist rivals had failed for their botched campaign strategy.

Principlist media on the other hand preferred not to speculate the final result of the election, but to praise citizens’ participation. Javan, affiliated with Revolutionary Guards, praised the high turnout, congratulating citizens for attending the ballot boxes and ‘reinforcing national power’. Resalat, an old-timer conservative daily, also praised Iranians’ “legendary participation”, stock phrase used in every election regardless of the turnout rate. The pro-Qalibaf Sobh-e No indirectly expressed concern about the fate of votes at the hand of the government, hence covering its front page with a picture of Supreme Leader Ayatollah Khamenei and a quote from Iran’s highest official, reading “Protect People’s Vote”. But it was headlines of the two most vocal newspapers of the Principlist camp, Kayhan and Vatan-e Emrooz, published online before release of the print version, that assured most their readers of Rouhani’s victory. “The Nation Did Its Best” read Kayhan’s top headline, accompanied with a subtitle that reported “violations” taking place during the election, a topic hardly touched upon by Principlist media before, as it was presumed to undermine trust in vote election process in the Islamic Republic of Iran. Vatan-e Emrooz, a relentless critic of Rouhani, had also called the election a “Celebration of Iran’s Democracy”, praising the democratic nature of the establishment.

Iran presidential election 2017, iranian media May 23, 2017
US trying to use JCPOA as leverage against Iran
In wake of Rouhani’s win, conservative rivals vow to remain on scene