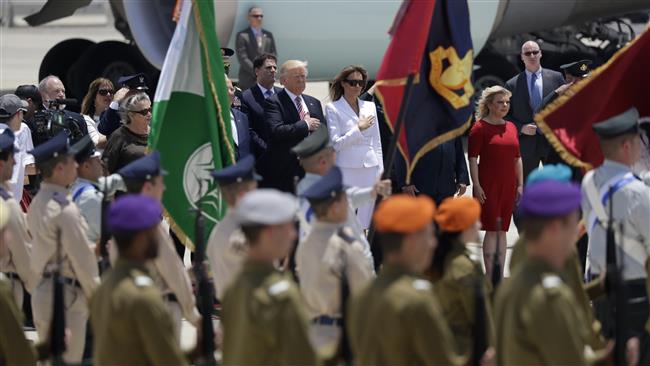 Trump and his wife, Melania, arrived in Tel Aviv’s Ben Gurion International Airport on Monday and were welcomed by Netanyahu and his wife on the red carpet during a grand welcoming ceremony, attended by all Israeli ministers.

During the 28-hour long stay, Trump is expected to set the tone for his administration’s efforts to resolve the Israeli-Palestinian conflict.

Speaking upon arrival, Trump described the trip as “a rare opportunity” to bring peace back to the region and asserted that he was there to “reaffirm the unbreakable bond” between the two allies.

Netanyahu said Sunday that his talks with Trump would revolve around strengthening “the first and strongest alliance with the US.”

“We will strengthen security ties, which are strengthening daily, and we will also discuss ways to advance peace,” he added.

Before holding the talks, Trump would tour East Jerusalem al-Quds. He would also become the first sitting US president to visit the Western Wall, a remnant of the retaining wall of the compound known to Muslims as al-Haram al-Sharif (Noble Sanctuary) and to Jews as the Temple Mount.

Accompanied by his senior adviser and son-in-law Jared Kushner and his Middle East envoy, Jason Greenblatt, the American head of state is slated to meet Palestinian President Mahmoud Abbas on Tuesday.

Earlier this month, Trump met with Abbas in the White House and pledged to broker the “ultimate deal” to resolve the Israeli-Palestinian conflict.

“It is something that I think is frankly maybe not as difficult as people have thought over the years,” he said back then.

The Israeli PM had ordered all of his cabinet ministers to attend the ceremony, after learning that some of them were planning to skip the event.

While in Saudi Arabia, Trump signed a massive $110 billion arms deal with Riyadh, angering some Israeli ministers and military officials who feared it would undermine Israel’s perceived position as having the region’s most powerful military force.