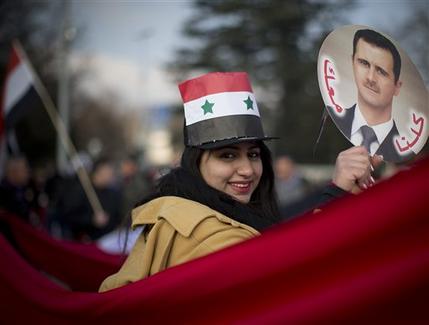 Press TV – Syria’s warring parties have reportedly been presented with a “surprise” United Nations proposal aimed at mapping a way forward to a new draft constitution for the conflict-ridden Arab country.

The representatives from the Damascus government and opposition groups are expected to respond to the UN initiative on Wednesday, the second day of the sixth round of Syrian peace talks in the Swiss city of Geneva, AFP reported.

Opposition figures said their meetings with the UN envoy had focused on the drafting of a new constitution and the issue of prisoners.

A source close to the Syrian government delegation confirmed that they had received a copy of the UN proposal.

A copy of the proposal seen by AFP said the “consultative” team would begin work immediately on “specific options for constitutional drafting” in an attempt to “prevent a constitutional or legal vacuum at any point during the political transition process being negotiated.”

However, the HNC’s Munzer Makhos said opposition figures had “many reservations” and were still discussing the document.

“It will become clear on Wednesday. This paper was a surprise — it was not expected in the first place,” Makhos added.

Since March 2011, Syria has been gripped by militancy it blames on some Western states and their regional allies that have long pushed for the ouster of the Damascus government.

Several rounds of intra-syrian peace talks have been held in Geneva and the Kazakh capital, Astana.

The Astana talks, brokered by Iran, Russia and Turkey, have most recently produced a memorandum of understanding on de-escalation zones in Syria, sharply reducing fighting in the country.