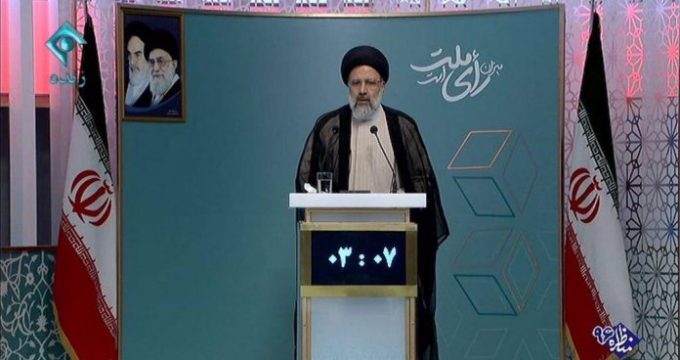 Raeisi says will use Qalibaf’s capacities if elected president

IRNA – Presidential Candidate Ebrahim Raeisi said that he will use all capacities of Mohammd Baqer Qalibaf, other candidate who withdrew in the former’s favor, in his administration if he is elected president.

Addressing a gathering of his supporters in Tehran Mosalla (Grand Mosque) Tuesday evening, Raeisi said that Qalibaf baosts of personal, social and managerial capacities which would be utilized in his administration called the ‘Government of Work and dignity’.

He also called on the people from all walks of life, especially the youth, to take part in the May 19 presidential polls in large numbers.

Describing his administration as the one with plans, Raeisi, also the custodian of Imam Reza (AS) holy shrine, said that his government will employ efficient and capable men and women in various positions.

“I am aware of the problems facing the country and I have plans for solving them,” Raeisi said, promising that he will generate at least one million job during each year his tenure.

Raeisi, who is a main challenger of incumbent President Hassan Rouhani, said if elected as president of Iran his administration will seek to have interaction with 180 countries instead of four. He said that he believes diplomacy of science, economy and politics “should undo knots’.”

Raeisi further noted that employment is one of the top priorities of his agenda.

On April 20, the Guardian Council approved six candidates to run for the presidential election.

However, two of the candidates (Qalibaf and Jahangiri) have so far dropped out from the presidential race in favor of another two (Raeisi and Rouhani).

Another presidential candidate, Hashemi Taba, had earlier announced in a message that he would vote for Rouhani but he did not explicitly said that he quitted the race.

Meanwhile, the Elections Headquartes announced that none of the candidates have officially withdrawn from the scene of presidential campaign.

Secretary of Elections HQ Ali Pourali Motlagh told IRNA that according to elections law any candidate wishing to quit presidential campaign should deliever his resignation in writing to the election headquarters and supervisory board.

None of the three candidates who dropped out in favor of another candidate has not written an official letter to the Elections Headquarters about their resignation.