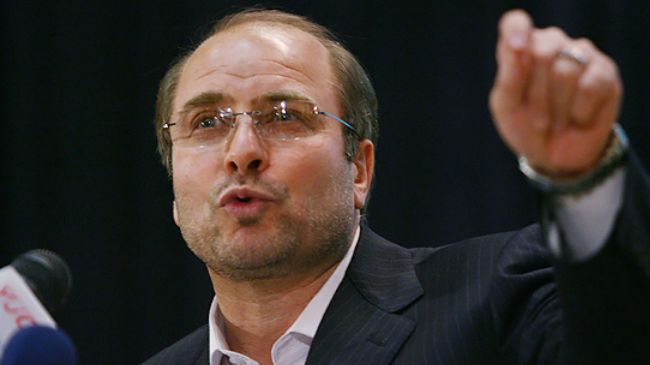 “Alliance with Raisi aimed at countering gov’t of Four-Percenters”

IFP – Mohammad Baqer Qalibaf, who dropped out of Iran’s presidential race in favour of his fellow right-winger Ebrahim Raisi, says the alliance is aimed at ending the tenure of a government that favours only a “four-percent” affluent minority of Iran’s population.

Tehran Mayor Qalibaf, who withdrew from Iran’s May 19 presidential election on Monday (May 15) in a bid to secure more votes for his fellow conservative Raisi, said their coalition is aimed at ending the tenure of the four-percenters’ government as well as the present status quo.

According to a report by IFP, addressing a huge rally of Raisi’s supporters staged at Tehran’s Imam Khomeini Grand Prayer Grounds (Mosalla) on Tuesday, Qalibaf said, “In these decisive and critical days, we came to this conclusion that, to end the term in office of the four-percenter’ government and the present status quo, I had to form an alliance with my 40-year-long friend and dear brother.”

“Today is a great day for the Revolutionary Front, on which we translated unity in the world into unity in action.  But this is not enough.”

He urged their supporters to do their best in the run-up to the election to set an all-time record of 96-percent turnout and end the Iranian President Hassan Rouhani’s term in office, which is an achievable target.

“We will end the tenure of the four-percenter’ government to let everybody know that we do know, want and can.”