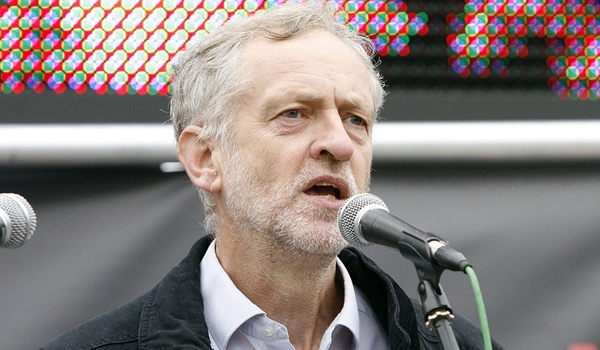 Labour govt. will ‘immediately recognize a state of Palestine’

Press TV- Britain’s opposition Labour Party has announced in its General Election manifesto that a Labour government will “immediately recognize” a state of Palestine if the party wins the June 8 vote.

Revealed by Labour leader Jeremy Corbyn on Tuesday in Bradford, the manifesto called for an end to Israel’s blockade and occupation of Palestine as well as construction of illegal settlements on the occupied Palestinian lands.

“Labour is committed to a comprehensive peace in the Middle East based on a two-state solution – a secure Israel alongside a secure and viable state of Palestine,” the document said.

“There can be no military solution to this conflict and all sides must avoid taking action that would make peace harder to achieve,” the manifesto stated. “Labour will continue to press for an immediate return to meaningful negotiations leading to a diplomatic resolution.”

“A Labour government will immediately recognize the state of Palestine,” it declared.

“We will also urge negotiations towards a political resolution in all other regions currently experiencing conflict, including Kashmir, Libya, Nigeria, Sudan, South Sudan, Somalia and Yemen, and give our strong support to those countries already working to end decades of division, including Colombia, Cyprus and the Democratic Republic of Congo,” the documented noted.

It seems the Labour Party was forced to make some amendments to its manifesto because an earlier leaked version even highlighted the “humanitarian crisis” in the occupied Palestinian territories, denouncing settlement-building in the occupied West Bank as “wrong, illegal and a threat to the peace process.”

Over half a million Israelis live in over 230 illegal settlements built since the 1967 Israeli occupation of the Palestinian territories. The presence and continued expansion of Israeli settlements in occupied Palestine has created a major obstacle for the efforts to establish peace in the Middle East.

Corbyn, an advocate of Palestinian rights

As a veteran peace activist, Labour leader Corbyn has long been critical of London’s involvement in US-led wars across the world its support of Israel in its unending oppression against Palestinians.

Corbyn has stood up for Palestine and Palestinian rights and has been a strong advocate against Britain’s foreign wars in the Middle East.

In a major speech on foreign policy on Friday, Corbyn accused Donald Trump of making the world a more dangerous place, and said British Prime Minister Theresa May is pandering to the US president.

“And the new US president seems determined to add to the dangers by recklessly escalating the confrontation with North Korea, unilaterally launching missile strikes on Syria,” opposing the international nuclear agreement with Iran and “backing a new nuclear arms race” with Russia, he stated.

Corbyn warned that May was seeking to “build a coalition of risk and insecurity with Donald Trump.”

The Labour manifesto released on Tuesday noted that the United States is increasing tensions “in other regions, including the Korean Peninsula and the South China Sea, threaten[ing] global peace.”

“Under a Labour government, Britain will work to reduce those tensions through an insistence on multilateral political dialogue,” it said.

Outlining its policy on the Daesh terrorist group, Labour underlined in its election manifesto that the Labour government “will take all lawful action necessary to counter and confront this evil, and we will advocate a long-term multinational political strategy, led by regional actors, to tackle the spread of extremism.”