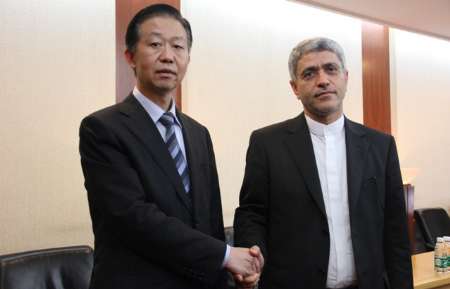 IRNA – Minister of Economic Affairs and Finance Ali Tayebnia conferred on Monday with Chinese Finance Minister Xiao Jie on the expansion of economic cooperation and removal of existing barriers between the two countries.

Tayebnia is now in Beijing to attend the international conference on Silk Road and was welcomed by his Chinese counterpart.

In the meeting, the two ministers reviewed issues of mutual interests and methods to meet the financial needs of Chinese banks which are to be engaged in infrastructural projects in Iran.

The Chinese minister, for his part, referred to the implementation of the new Silk Road project dubbed “One Belt-One Way” and welcomed contribution of third countries in constructing the road.

Beijing is determined to remove existing hurdles so as to broaden mutual cooperation, he said.

The one-day conference wound up on Monday.