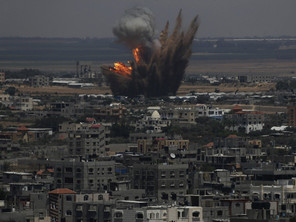 Al Monitor | Ahmed el-Komi: Israel’s Reshet Bet radio station announced April 29 that Israel has laid out a plan — the first of its kind — to establish a railway from Israel to the Gaza Strip through the Erez border crossing to facilitate the entry of goods to Gaza and the movement of people into and out of the Strip.

In an article in Yedioth Ahronoth, writer Matan Tzuri quoted Kamil Abu Rukun, the head of the Land Crossings Authority at the Israeli Defense Ministry, as saying that the plan will expand the Erez crossing and that the station would be built in agricultural fields near the Erez settlement.

During his meeting with the heads of settlement blocs in the Gaza envelope, Abu Rukun said that the main driver behind the plan was the widening humanitarian crisis in the Gaza Strip and its increasing impact on vital sectors, as well as the potential impact of such crises on Israel’s security.

In its report, Tzuri also cited Alon Shuster, head of the Sha’ar Hanegev settlement bloc, as saying that the plan will have international political and financial support.

The Erez crossing is dedicated to Palestinian merchants, foreign delegations and missions, and Palestinian medical patients. To cross it requires permits from the Israeli authorities in coordination with the Palestinian Authority’s (PA) General Authority of Civil Affairs.

Mohammed al-Maqadmeh, the director of information at the PA’s General Authority of Civil Affairs, which monitors the implementation of agreements with Israel, told Al-Monitor that the Erez crossing is dedicated to businessmen and merchants who have common interests with the Israelis.

#FreePalestine, Gaza Strip, Israel May 16, 2017
Photos: Iran marks National Ferdowsi Day
No media report allowed for or against presidential candidates as of Thursday