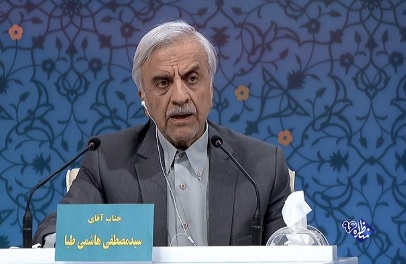 Presidential candidate says he will vote for Rouhani

Hashemi Taba made the remarks in a statement released on Monday.

The presidential candidate underlined importance of protecting national security and peace in the country.

He also hailed the incumbent government successes, including removal of sanctions, increase of oil export, realization of economic growth and execution of healthcare program.

The presidential candidate called for attaching importance to agriculture sector and eliminating state subsidies for rich as well as absorbing foreign investments.

Hashemi Taba said, “He will vote for the current president to help extension of this government constructive approach.”

Hashemi-Taba, (born in 1947), was a vice president under former Presidents late Ayatollah Akbar Hashemi Rafsanjani, a former minister of industries, and the former head of the Sports Organization.