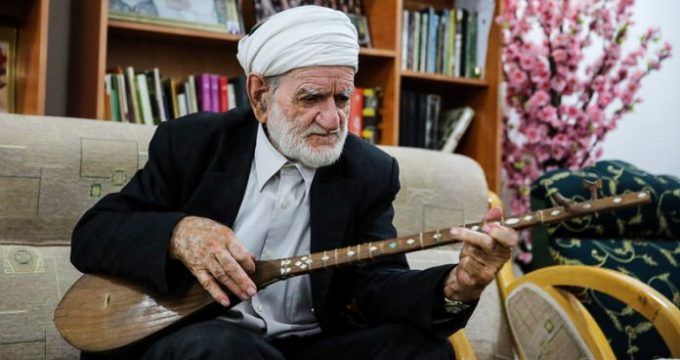 Iranian maestro who learned to play without teacher

IFP – A veteran Iranian musician speaks of his deep love for music and how he learned to play the dotar without having a teacher.

Osman Mohammadparast, a professional player of the dotar, an Iranian traditional musical instrument, says society will lose its identity without artists.

The 89-year-old virtuoso musician, who has been in hospital for quite some time due to an illness, says he has not charged anyone a single penny for playing the dotar. However, the musician says, “I have built hundreds of schools with this very instrument.”

Mohammadparast was hospitalized with a spine disc condition and joint pain in the northeastern city of Mashhad several days ago. Doctors had instructed him not to even sit up to welcome visitors.

He was interviewed while in bed after undergoing surgery. He smiled despite all the pain he was in.

“As soon as I return home, I will greet my dotar again,” said the musician.

He said dotar players have something missing if they do not have the instrument with them.

Mohammadparast was born in 1928 in the ancient city of Khaaf in northeastern Iran. He fell in love with the dotar when he was a child and began to learn to play it without having a teacher.

“When I was 12, I picked up the dotar and promised myself never to put it down till the end of my life,” he says.

He believes the dotar gives one peace of mind and is part of Iran’s culture. According to him, the dotar is associated with a kind of music known as “Maqami” or Mugham in Farsi. He says this kind of music goes back generations, and that “we should complete and bequeath it to our children.”

He says the Maqami music has been institutionalized in the hearts of Iranian people.

The virtuoso musician has numerous performances on his track record.