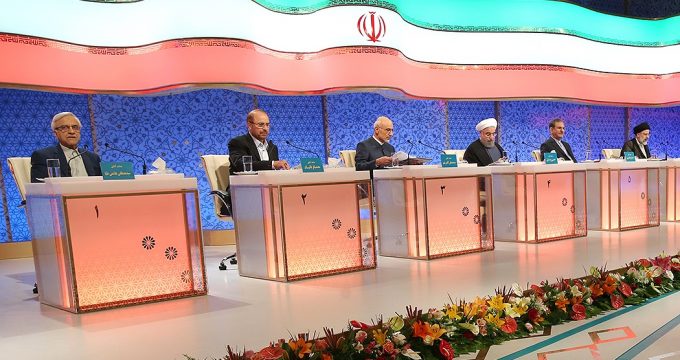 During the debate on Friday, the contestants are scheduled to elaborate on their economic plans and agendas issues as they campaign for the May vote.

The first one saw the aspirants sparring and addressing sundry issues. The second one was much more heated, with candidates aiming directly for each other’s past and present performances.

Upon entering the headquarters of the Islamic Republic of Iran Broadcasting (IRIB), the venue of the debate, Qalibaf said the implementation of any economic plan will affect the interests of the “four-percent” minority, a term he has been using throughout his campaigning to refer to the unfair distribution of wealth and opportunities in the country. He also expressed hope that candidates would focus on economic issues in the debate and not digress from the issue at hand.

In an interview prior to his participation in the debate, Mirsalim said the economic debate would be more important than the two previous televised clashes due to the fact that the major problem of Iranians concerns economic woes, adding that the issue is more acute for the youths.

As he showed up for the debate, Raeisi said in the debates, the Iranians want to learns two things; one is the performance of the incumbent administration and the other is the candidates’ agendas. He, too, stressed that the main concern of the people is economic issues. He cited the closure of factories, the impoverished people, workers, villagers and those involved in the production sector as some of the areas of concern.

Also speaking prior to partaking in the debate, Rouhani said Iranian people expect that the candidates set out their backgrounds in economic issues and explain what they have done. He added that the hopefuls must also lay out the resources that they have in mind for the implementation of their economic agendas, how they plan to fund them and how much inflation would be caused.

And the debate begins in earnest with Jahangiri drawn first to answer a question about his plans to fight smuggling and reduce imports. He said the smuggling of commodities undermines domestic production and diverts the course of economy from the right course. He added that the oversight in dealing with the smuggling of goods has dealt severe blows to the country’s economy.

Presidential candidates took turns to express their views on Jahangiri’s remarks with Raeisi saying that the backbone of his anti-smuggling plan is based on extensive research conducted in universities. He added that the 11th administration was not serious in dealing with the smuggling of goods.  Hashemi-Taba said that 114 official docks have been used to smuggle goods into country.

Qalibaf said prevention is the first step in fighting goods smuggling and added that some cabinet ministers are engaged in illegal import of commodities to the country. Rouhani said the first concern with regard to the smuggling is its root causes. He added that the private sector’s economic activities must be encouraged to reduce smuggling and emphasized that border villages must start producing and exporting goods in order to curb smuggling.

Jahangiri retook the podium to answer the candidates’ questions and said the judiciary has appeared weak in fighting the smuggling of goods. He added that the current administration has taken serious measures to stop astronomical salaries. The Iranian first vice president said Tehran Municipality has not come clean on the selling of underpriced properties to certain people.

Aqa-Mirsalim, the second hopeful taking to the podium, was asked to outline his approaches to boosting exports and reducing the country’s dependence on oil. He said he plans to reduce crude oil sales in favor of exporting domestic products. He added that the sales of crude oil have made the country more dependent on other countries and added that exports must be encouraged to make up for expensive production inside the country.

The presidential contestants took turns to express their views on Aqa-Mirsalim’s remarks with Rouhani saying that his administration has managed to open Iran’s export markets through the signing and implementation of the landmark 2015 nuclear deal, known as the Joint Comprehensive Plan of Action (JCPOA). He added that if the country does not exploit shared energy fields, the neighboring states will extract their oil reserves. Jahangiri said the 11th administration has considerably reduced the export of raw materials. Raeisi said the building of refineries in various provinces would reduce crude oil sales and criticized that no measure has been carried out in this regard. He added that there is currently no serious will to fight the smuggling of goods in the country. Hashemi-Taba said export-oriented domestic production would help reduce the smuggling of goods. Qalibaf said people with vested interest in smuggling have prevented solving the problem.

Aqa-Mirsalim retook the podium to respond to the candidates’ questions, saying Iran must work with its neighboring countries to safeguard shared energy fields. He added that the administration of President Rouhani has failed to use the JCPOA to boost Iran’s foreign trade. He stressed the importance of the access to modern technology in order to improve exports.

Rouhani, the third candidate at the podium, used his four-minute time to express his plans to solve the problems in the country’s banking system. He said Iran’s banking system needs fundamental reforms. The incumbent president added that his administration has managed to double the capital of state-run banks to get more active in the economic sector.