A Look at Iranian Newspaper Front Pages on May 11

Iran Front Page_ IFP has taken a look at the front pages of Iranian newspapers on Thursday and picked headlines from 18 of them. IFP has simply translated the headlines and does not vouch for their accuracy.

All Iranian newspapers today highlighted the warning issued by the Leader of Iran’s Islamic Revolution Ayatollah Seyyed Ali Khamenei against those who disrupt the security of Iran’s upcoming elections.

Another top story was the third and final presidential debate, which is going to be live aired on Friday afternoon. Speculations about the approaches presidential candidates will adopt, and the questions they should answer were particularly highlighted.

A list of candidates for Tehran city council election proposed by the Reformists’ High Council of Policy-Making was also widely covered by newspapers today. Many reformists are critical of the list, questioning the competence of the ones included in the list.

1- Whoever Wants to Disrupt Security of Elections Will Be Slapped on Face: Iran Leader

2- Mirsalim: I’m Not Going to Beg for Votes 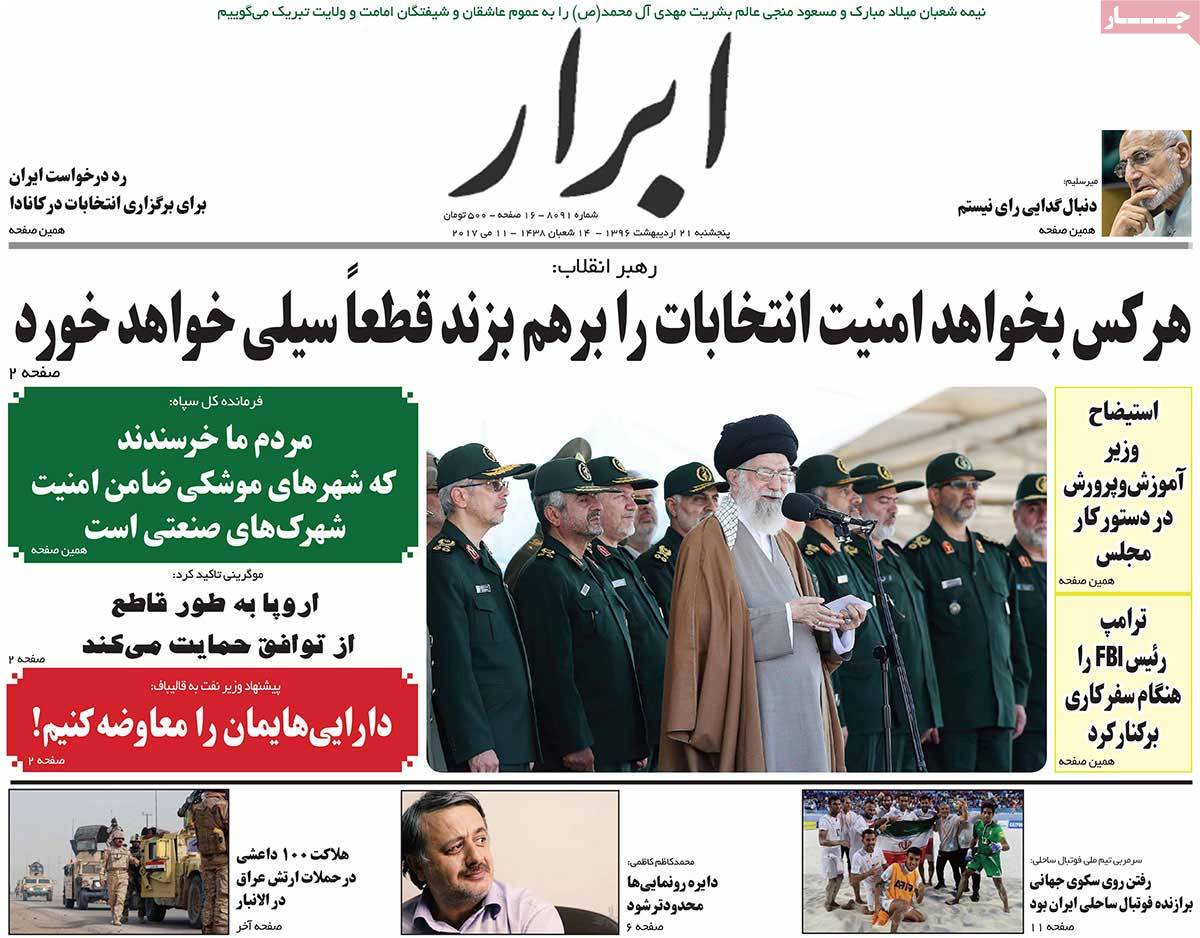 2- Raisi: We’ll Build Great Wall between People’s Rights and Those Who Violate Them 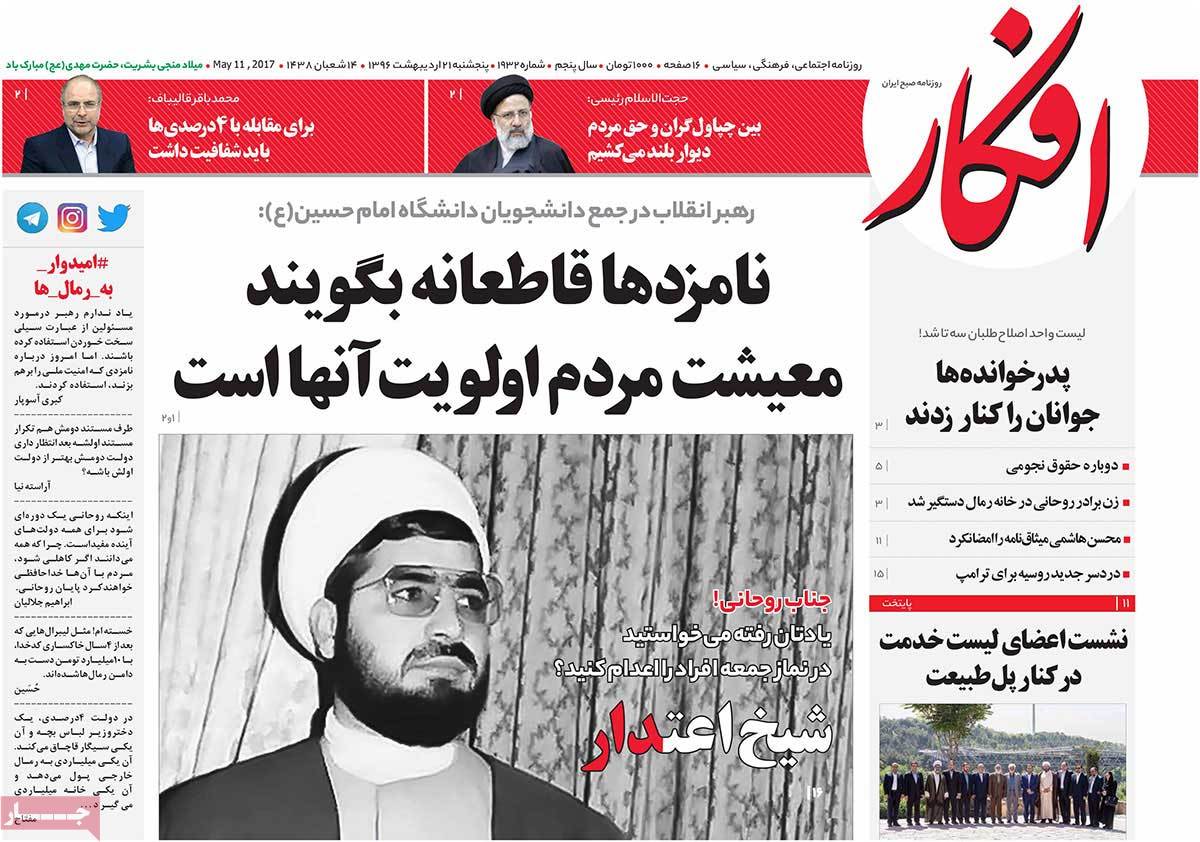 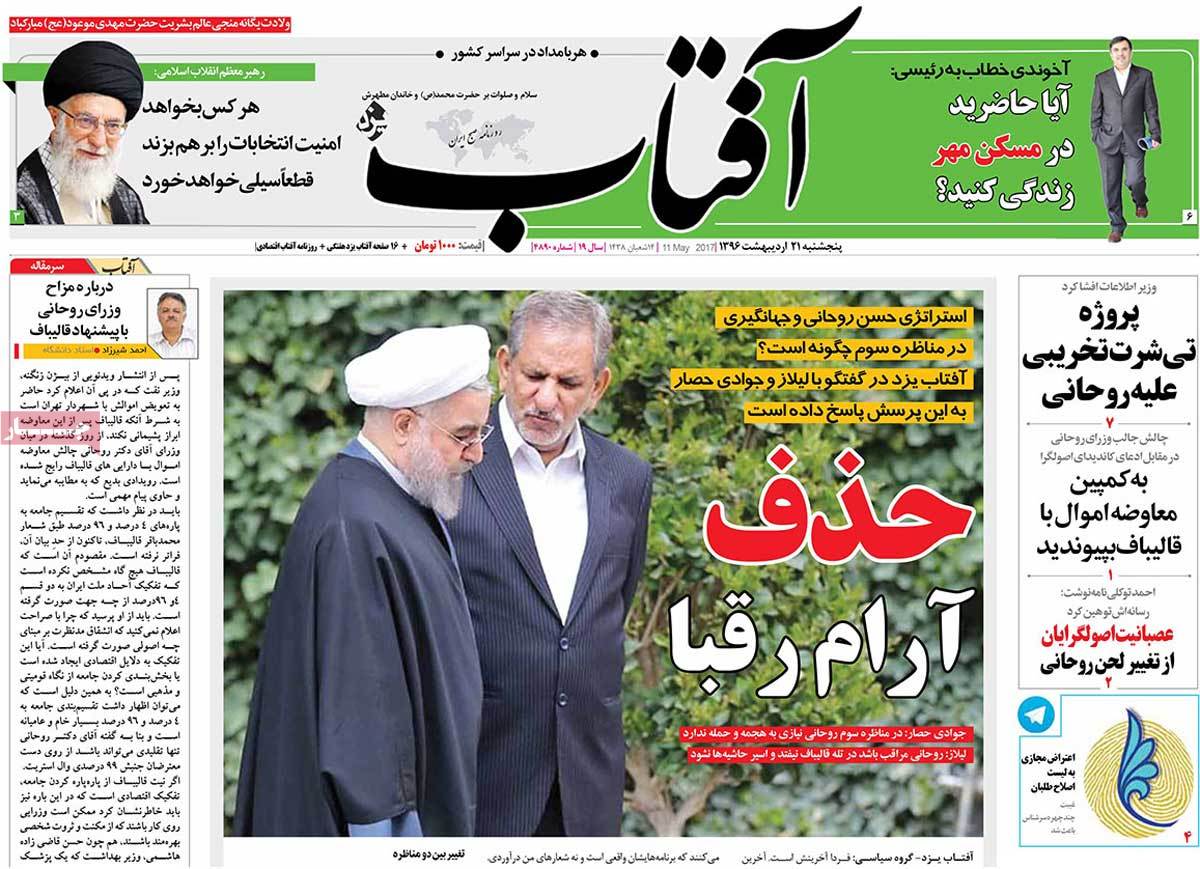 2- Artists, Athletes Vow to Vote for Continuation of This Path

4- Jahangiri to Qalibaf: I’ll Show Reaction If You Say Anything Wrong 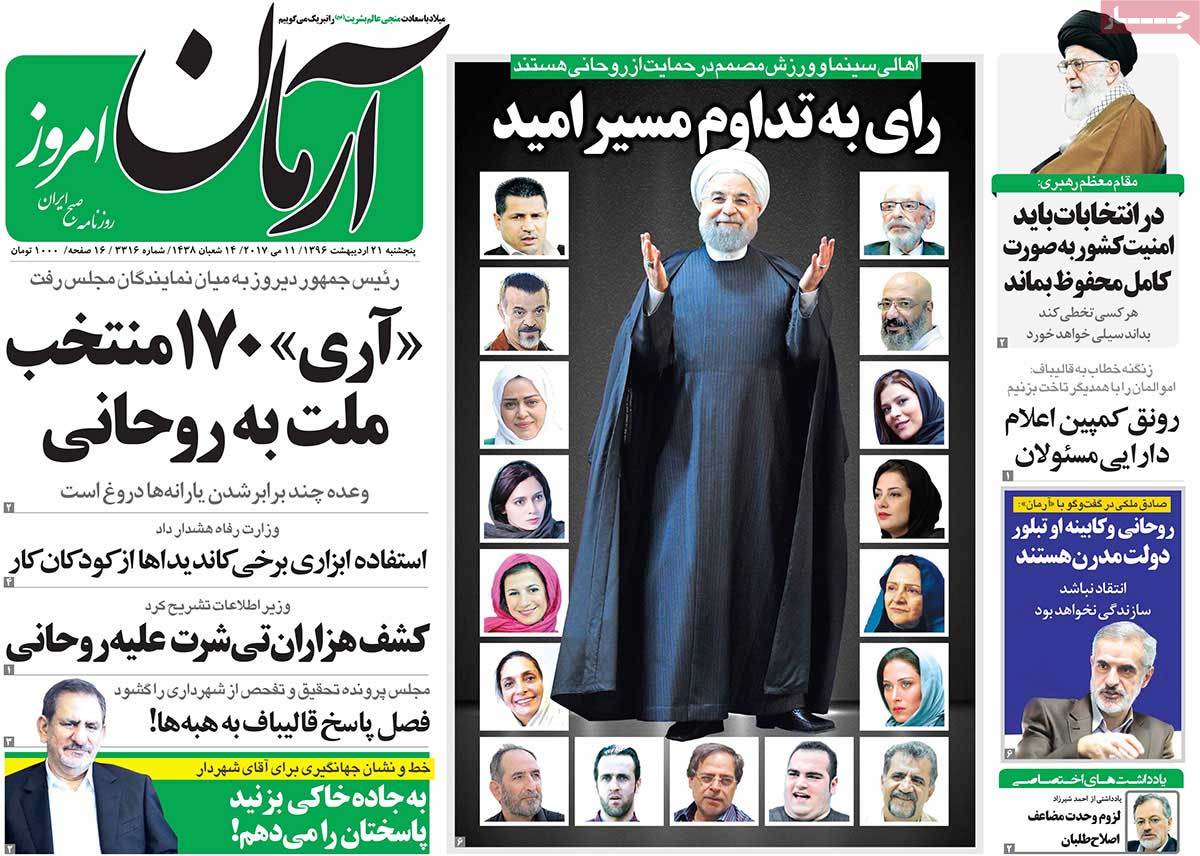 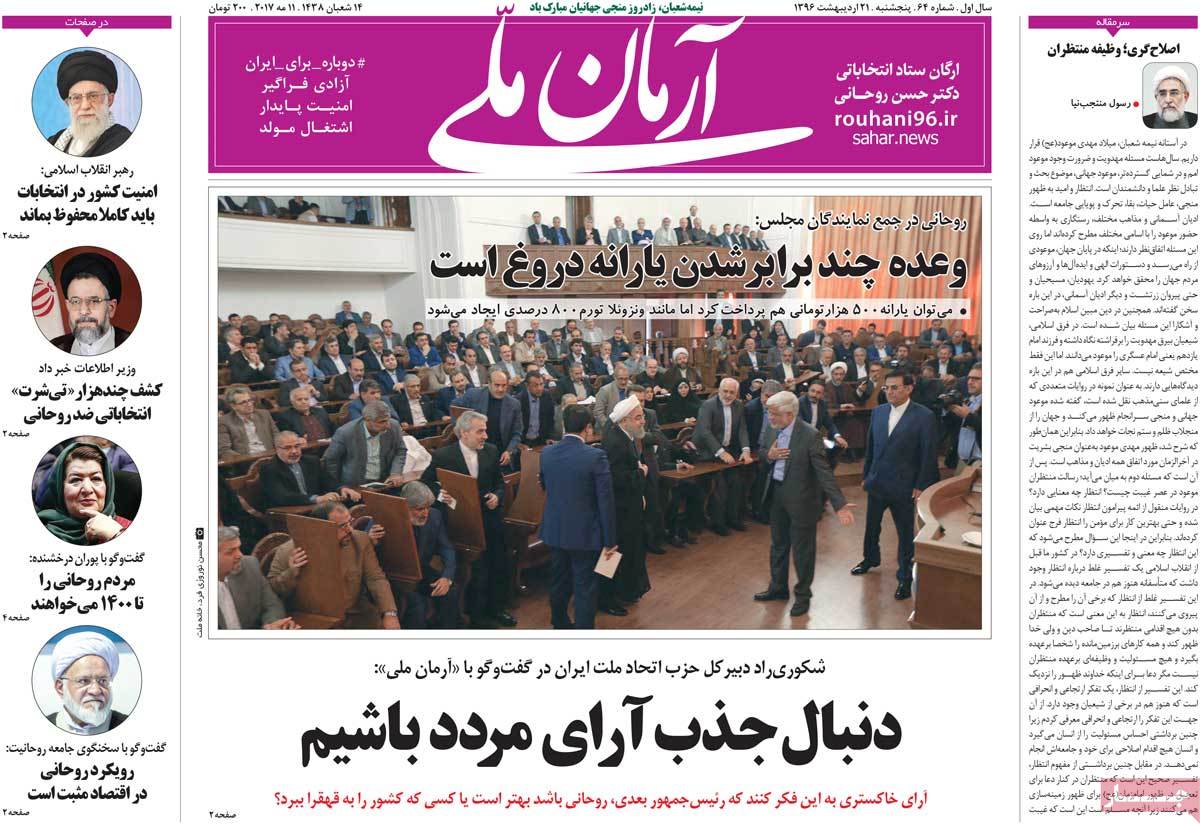 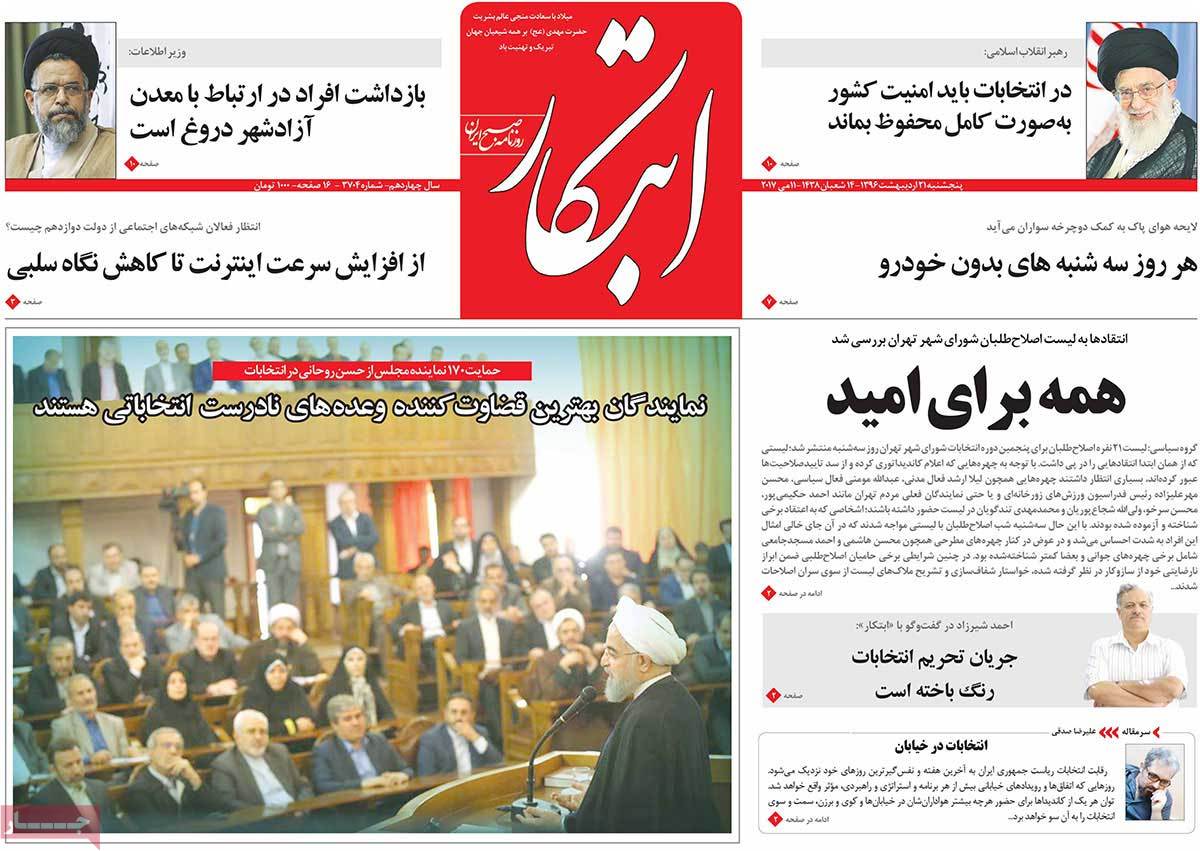 2- Reformist MP to Rouhani: Don’t Let Rivals Derail You from Path of Moderation 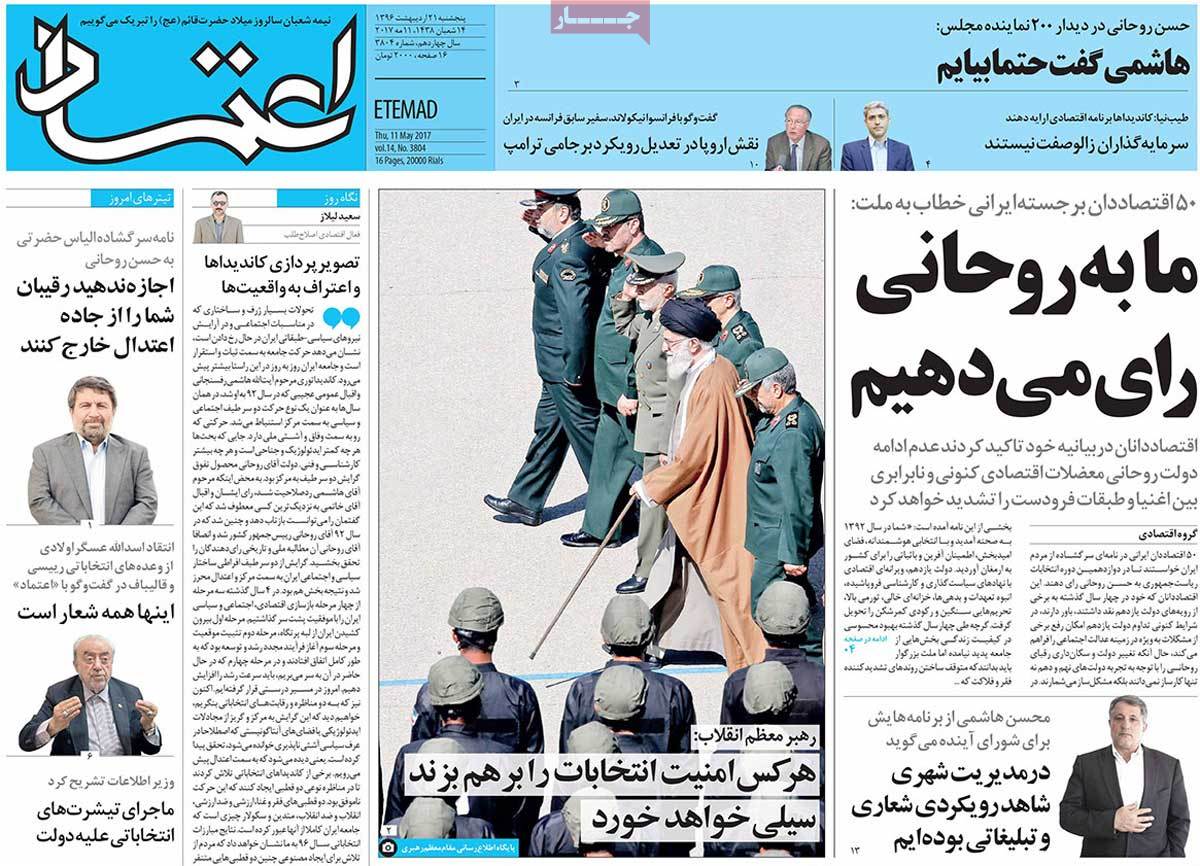 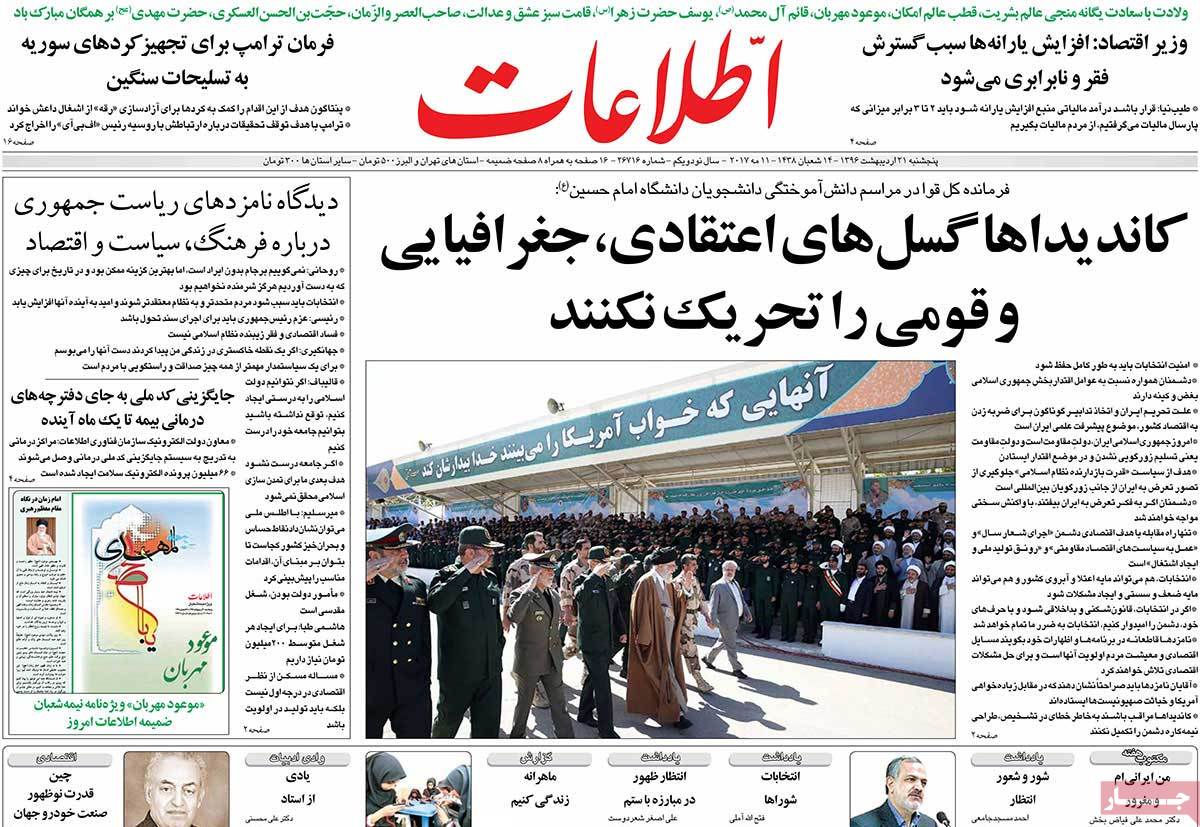 1- Is Another Watergate Coming?

2- Third Presidential Debate: What Weapons Will Candidates Use? 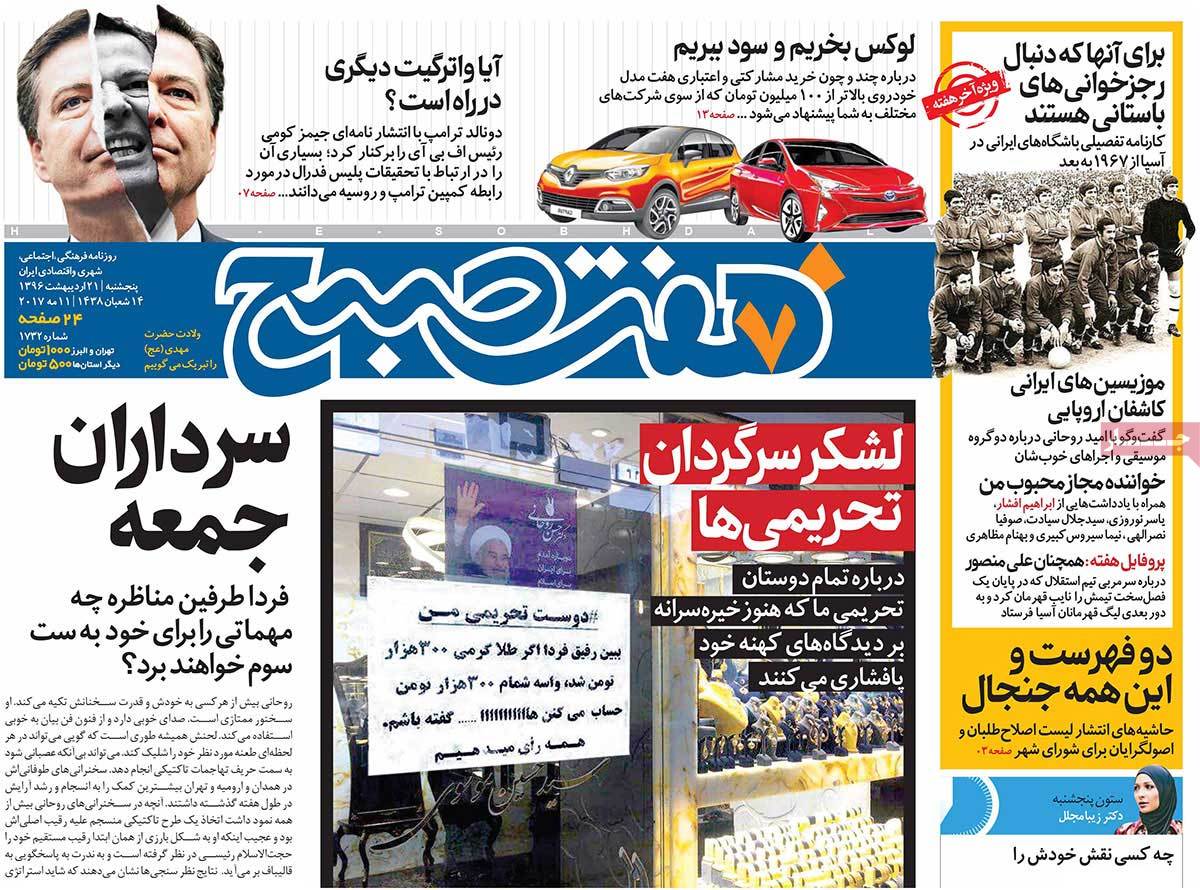 1- Leader: Whoever Disrupts Security of Iran Elections Will Be Slapped on Face

1- Conservative Candidate: Mr Rouhani! Where Are You Heading to? 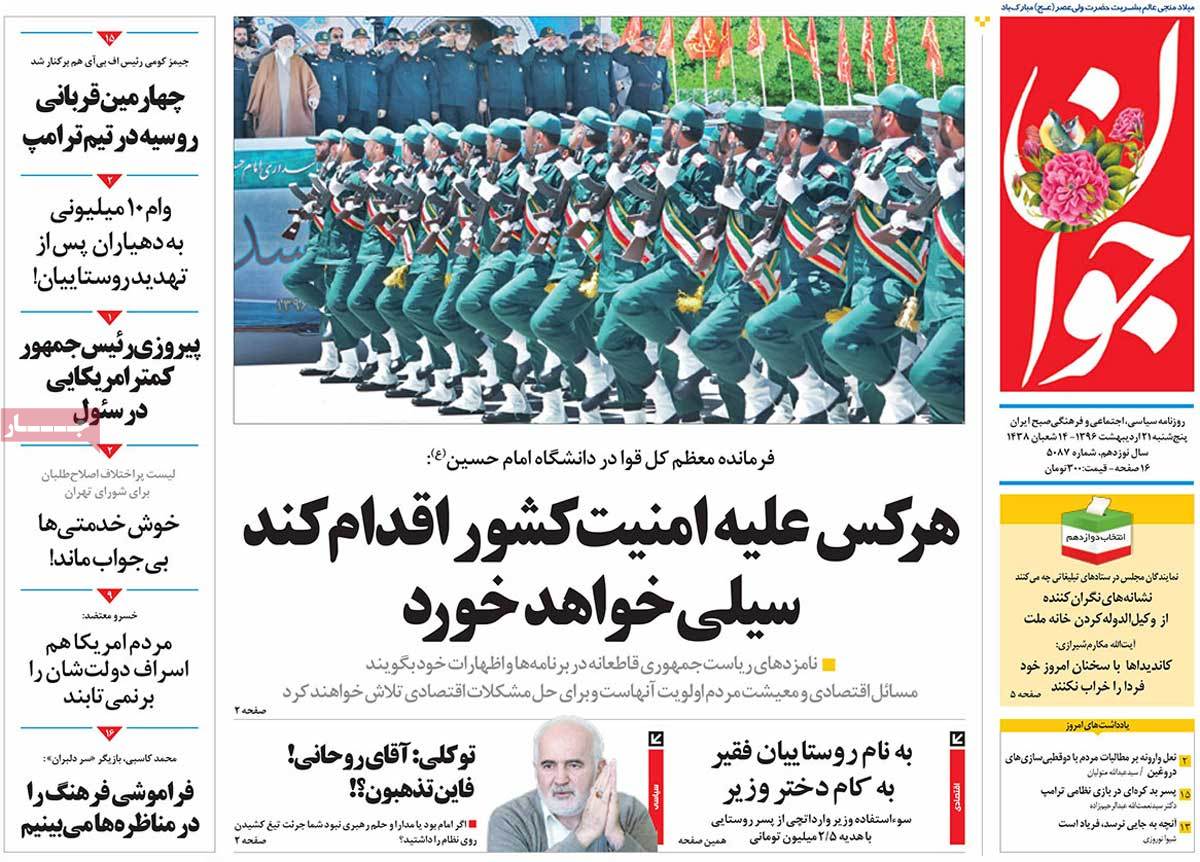 2- Senior Cleric: Candidates Who Disgrace Rivals Are Not Good Choices 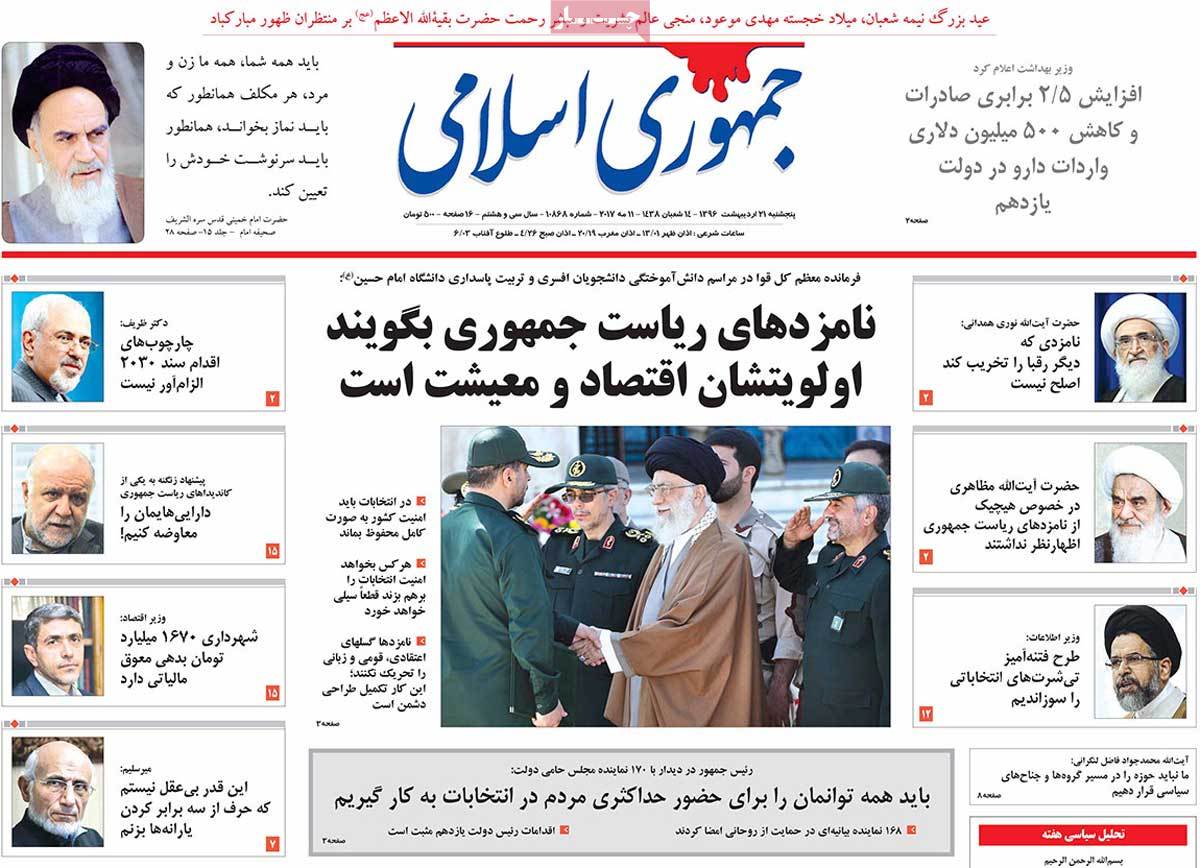 1- Whoever Wants to Disrupt Security of Elections Will Be Slapped on Face: Iran Leader

2- People’s Questions from Rouhani Are: 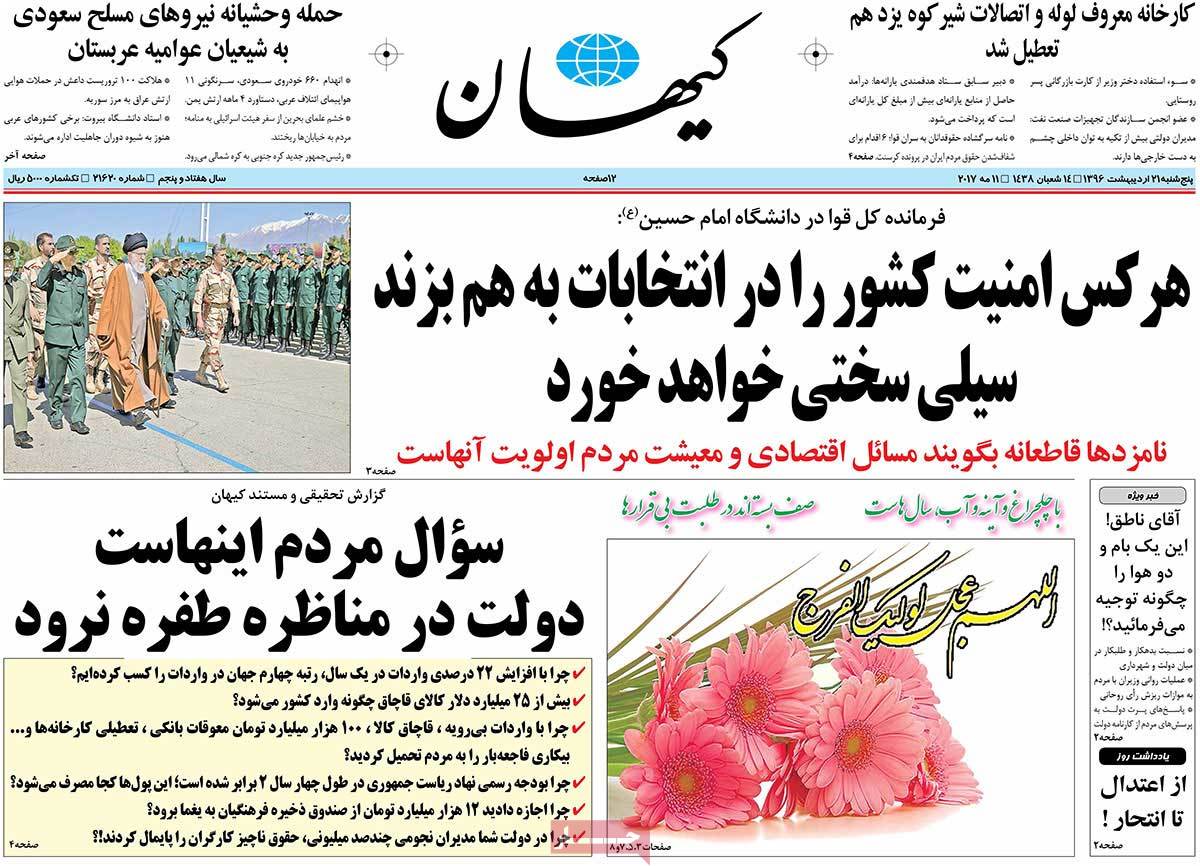 2- Raisi: I Won’t Use My Relatives, Close Associates in Official Positions 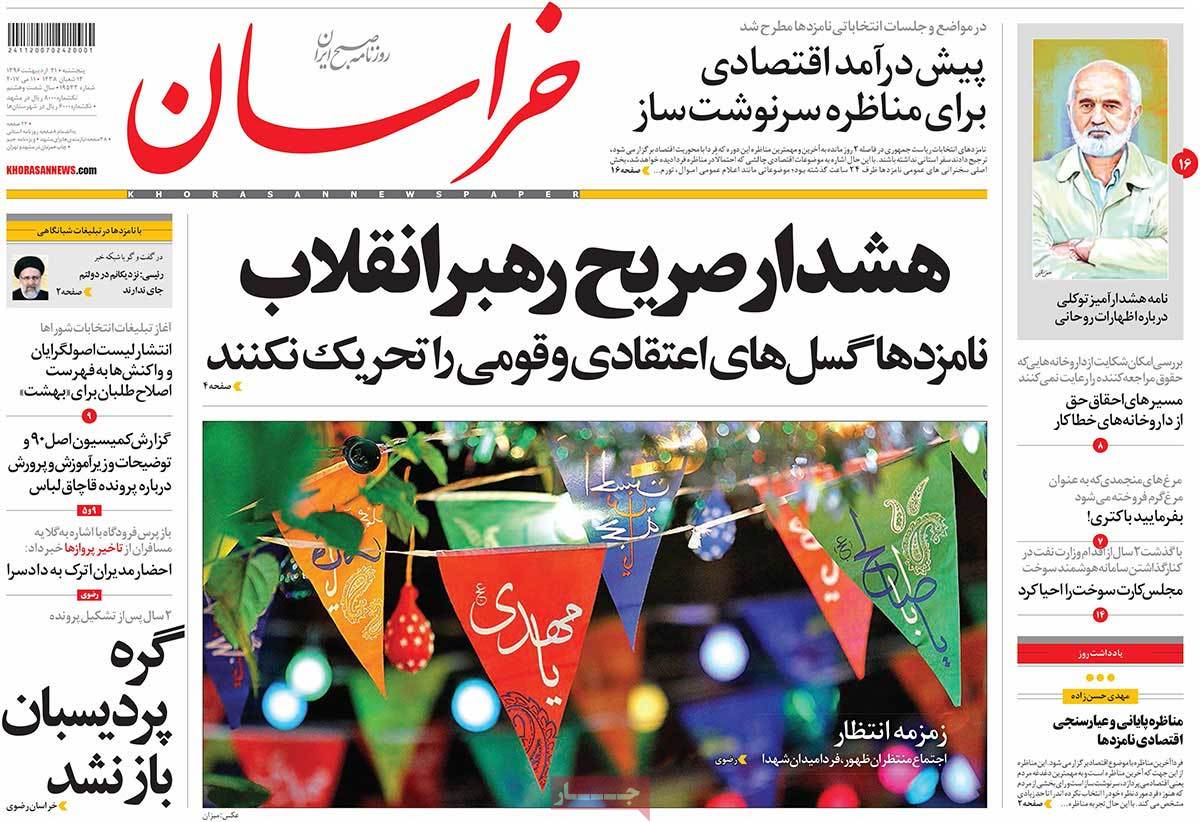 1- Qalibaf: You Keep Saying We Don’t Have, It’s Not Possible, We Can’t When It Comes to People

2- Raisi: Some Are Even Doing Business with Spectre of War

3- Mirsalim: No Good Fate for Those Doing against What Leader Says 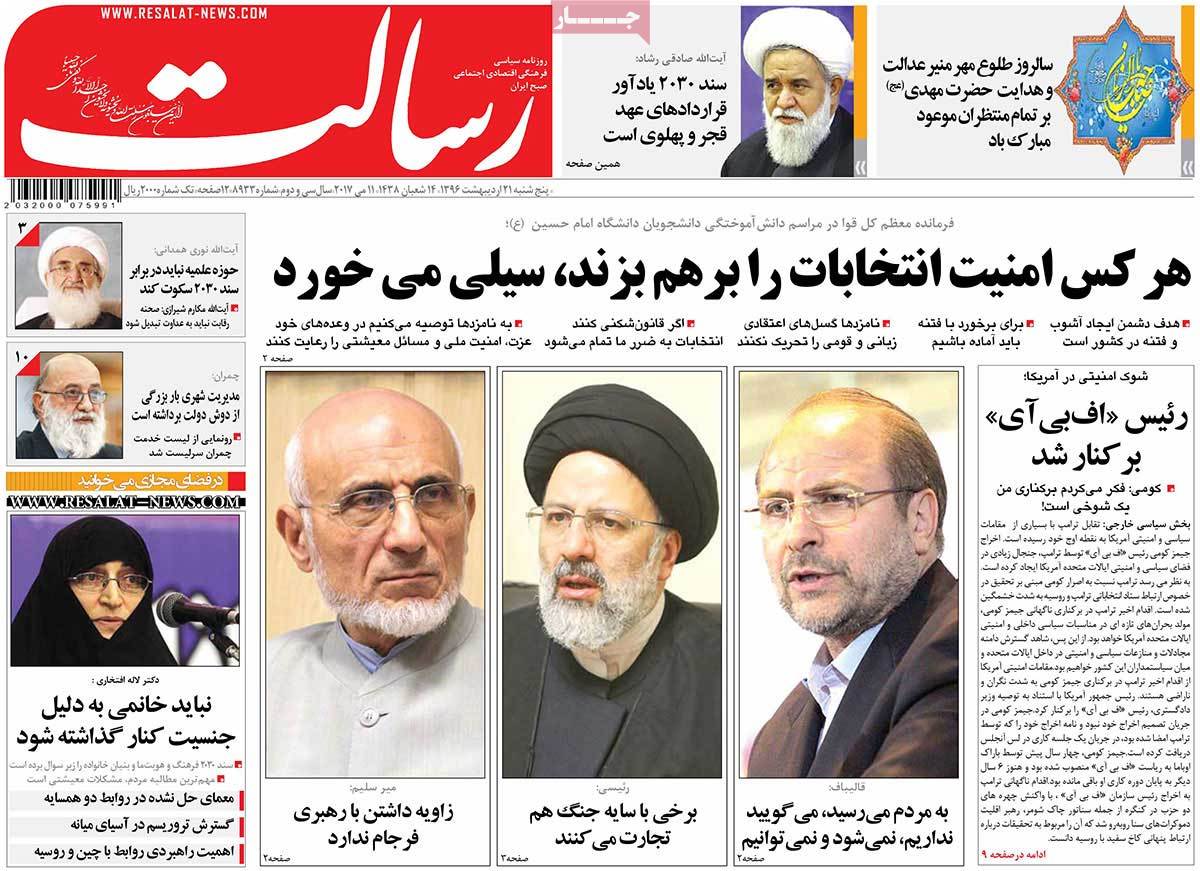 1- Qalibaf: We Should Try to Fight High Prices 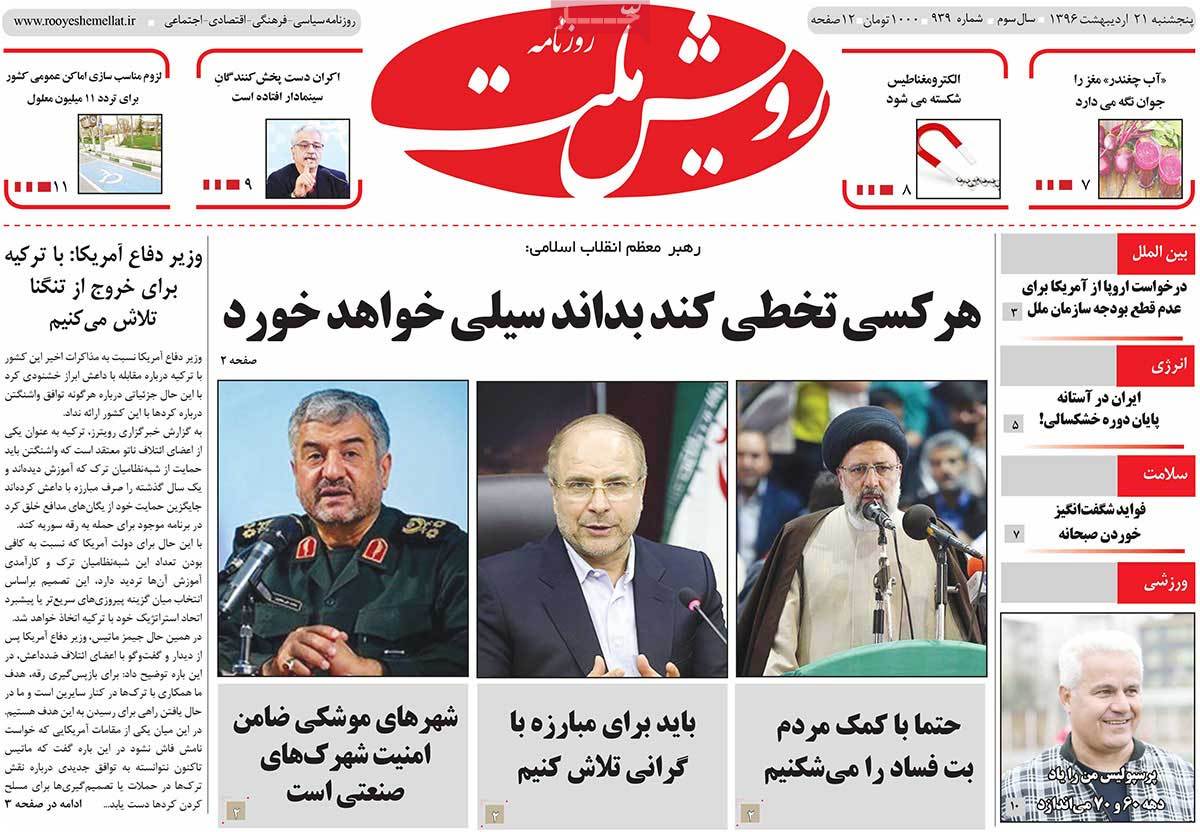 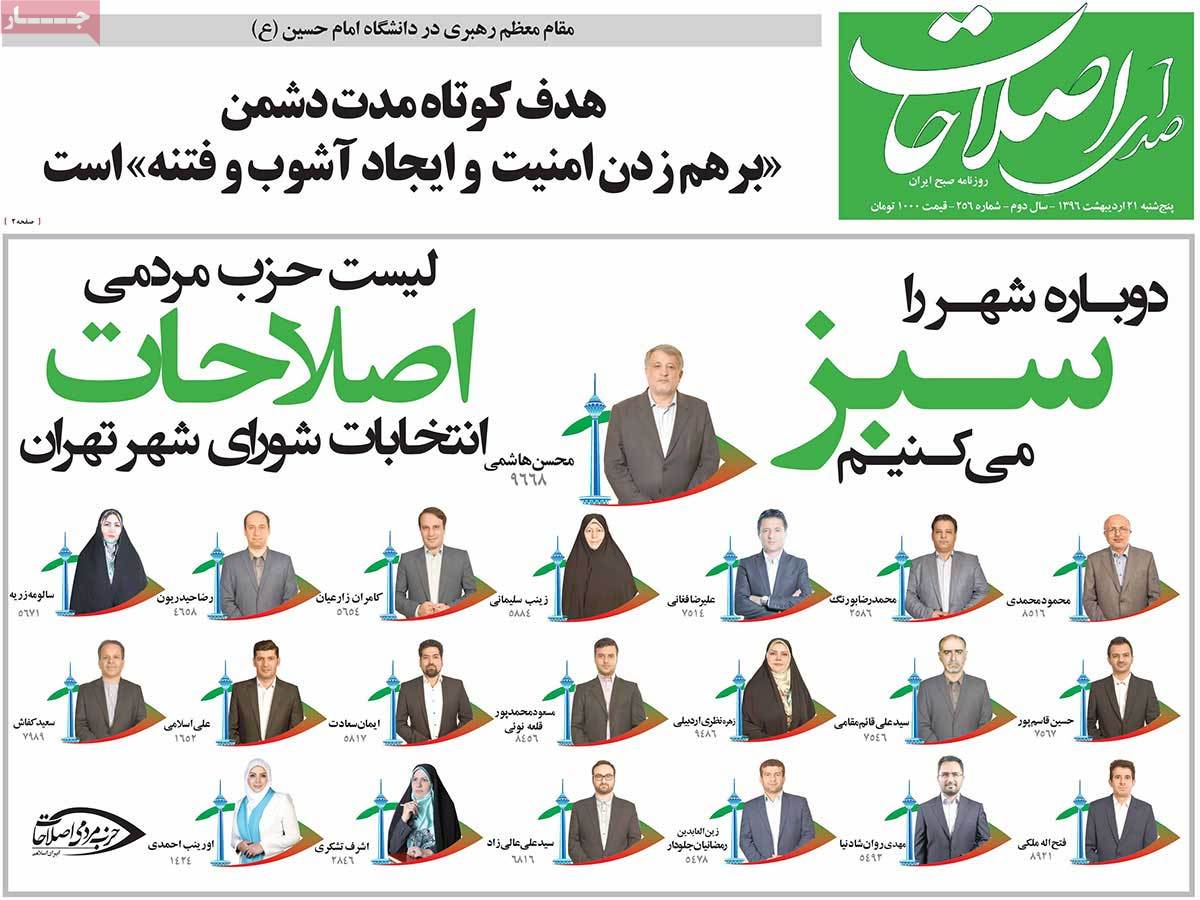 1- All Candidates to Raise Harshest Criticisms on Friday Evening 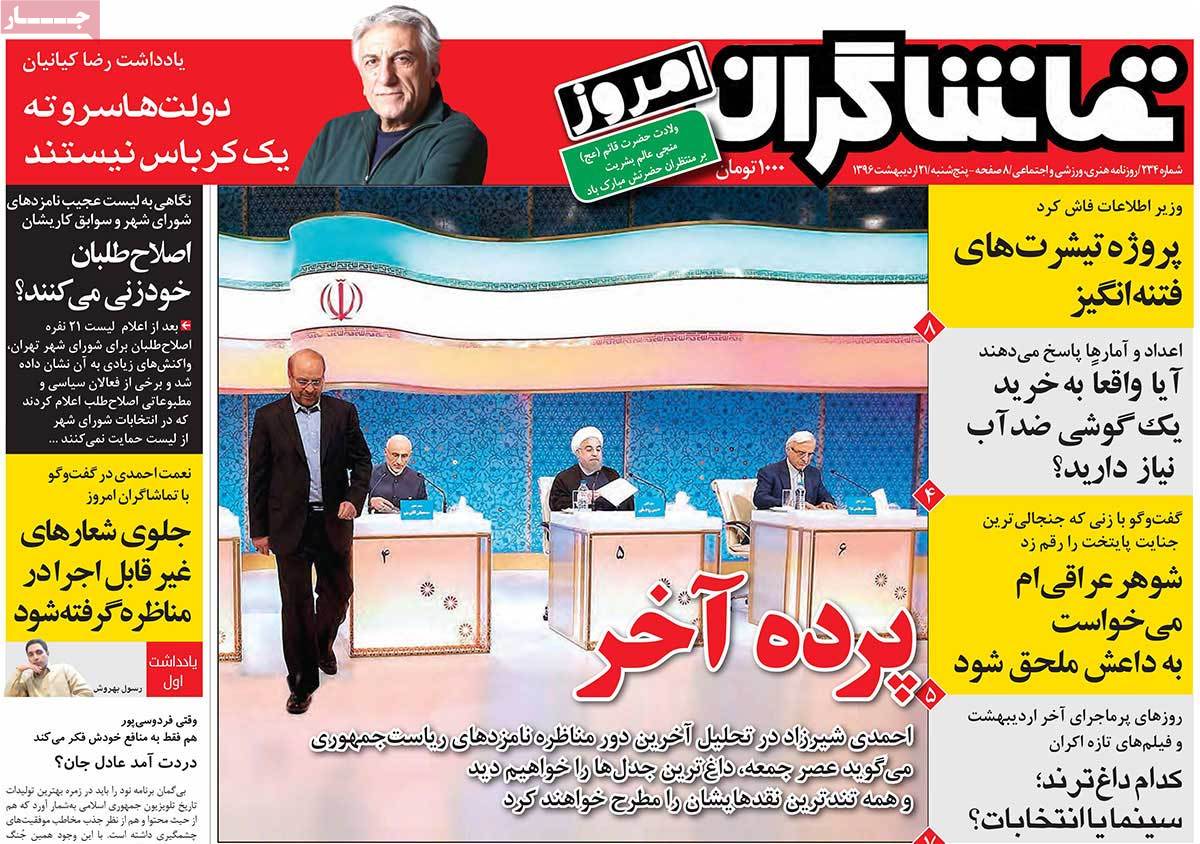