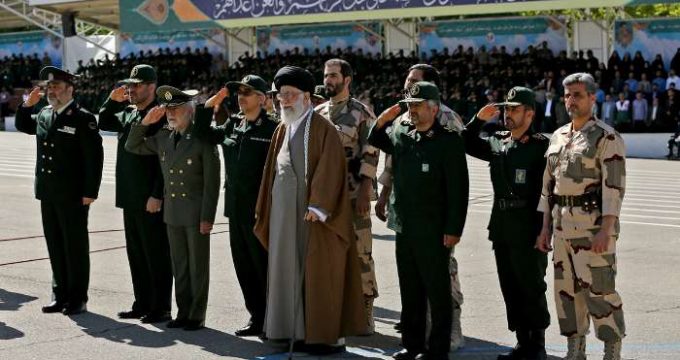 “The enemies should know that if they think of aggression against Iran, they will face a harsh reaction,” Ayatollah Khamenei said, addressing the graduation ceremony of the Islamic Revolution Guards Corps (IRGC) cadets at Imam Hussain (as) University on Wednesday.

Noting that the era of attacking and sitting in relief has gone and any action will receive reactions, he said, “They (enemies) maybe the starter (of a war) but the ending will not be in their hands.”

Ayatollah Khamenei also referred to the upcoming presidential election in Iran, and stressed, “The elections can be the source of grace and dignity for the country or the source of weakness and debility, causing problems for the country. If the people participate, orderly, in the election, if they move on ethically observing the Islamic borderlines and laws, it will bring about the glory of the Islamic Republic. But if they break the rules or cause misconduct, if they please the enemies with their words, the elections will end to our detriment.”

The Supreme Leader stated that the enemy’s short-term goal is meant to distort the country’s security and trigger chaos and sedition, and added, “The main goal is to destroy the Islamic Republic’s great source of pride. We have managed to create a safe haven in a region filled with unrests and a world of full of tension; they want to take this away from the nation. If we prepare ourselves to combat the plots creating insecurity and sedition, we can certainly nullify them.”

“The enemy’s mid-term goal is targeting issues like that of the economy and living conditions of the people; it is to make the economy stagnant and lagging; employment and production remain at a low rate and spread as a calamity throughout the country; so that the people will lose hope in the Islamic Republic over economic problems,” Ayatollah Khamenei said.

He dubbed the main long-term goal of the enemy as an effort to change the system, and said, “At one time they used to openly say that the Islamic Republic should be destroyed, later they realized they cannot as this would put an end to their detriment; so, they normalized it and called for the Islamic Republic’s change in behavior. I told the officials then that bear in mind their call for a change of behavior is no different from changing the system. Changing behavior means that we should distance from the path of Islam, the revolution and Imam Khomeini, a path we have been walking on and gradually moving on to the other side. Changing behavior means changing the Islamic establishment.”

“I advise the candidates to make sure they observe these points in their campaign promises. One is economy; they should certainly pay attention and firmly declare that they desire to make efforts to improve the economy of the country; and that the livelihood of the people is a number one priority. The second point is that they should demonstrate in their campaign promises and remarks that the concern is national glory and independence of the Iranian nation. The Iranian nation is a revolutionary nation. The glory of the nation must be protected. The third point is national security and national peace; they should avoid triggering belief, geographical, lingual or ethnic differences; they should be careful. The candidates should be careful that by a detection error, they won’t trigger these differences to the benefit of the enemy.”

The Leader of the Revolution warned that if anyone wants to rise against the country’s security, they will certainly face a harsh response, and added, “The vicious Zionist-American multibillionaire who said, I can create rummage in Georgia with 10 million dollars, was stupid enough to consider influencing the Islamic Republic—with such grandeur—in 2009. They hit themselves into a firm and strong wall of national willpower and determination. It is the same today.”